Duterte slams use of gov’t cars for Mar 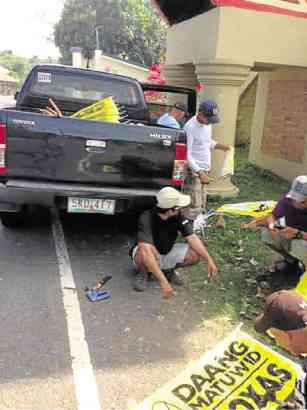 THIS PHOTO was taken in the border of Zamboanga City and Zamboanga Sibugay during the campaign period and has been making the rounds of Facebook. CONTRIBUTED PHOTO

DAVAO CITY—The camp of Mayor Rodrigo Duterte and a militant group have assailed what they termed as the glaring use of government resources for the campaign of Liberal Party (LP) presidential and vice presidential candidates Mar Roxas and Leni Robredo.

But Akbayan Rep. Barry Gutierrez, spokesperson of the Daang Matuwid coalition, had denied that government resources are being used for Roxas’ campaign.

He said the ruling Liberal Party would look into the alleged use of a government vehicle to transport posters of Roxas and Robredo.

“We have reminded all our allies and supporters to abide by the rules set by the Comelec (Commission on Elections) and existing election laws,” Gutierrez said in a previous interview.

Roxas called for an investigation of the alleged use of government vehicles in putting up his campaign posters.

He said the license plates of these vehicles could determine which agencies these belonged.

“If these vehicles had plate numbers, we would know who used these vehicles and determine what happened,” said Roxas who was in Cebu City on Thursday for a campaign sortie.

But he said those in government should follow regulations especially on the use of government vehicles.

“We should follow the rules and this (using government vehicles in putting up campaign posters) should not be,” he added.

Lawyer Paola Alvarez, spokesperson of the Partido Demokratikong Pilipino-Lakas ng Bayan, said supporters of Roxas and Robredo have been using government vehicles in putting up posters of their candidates.

“It (the use of government vehicles) only exposes the kind of governance under the Daang Matuwid,” Alvarez said.

“It is a platform of deceit, conditioning Filipinos that this administration has been clean and efficient, when in reality it is corrupt and worse than past administrations,” Alvarez said in a statement.

“This administration is doing everything to push its cards on the table,” said Alvarez.

Peter Lavina, Duterte’s spokesperson, also said Roxas has been dangling government programs such as the Bottom-Up Budgeting process and 4Ps in his campaign sorties.

Anakbayan also assailed the use of the conditional cash transfer program to win votes for Roxas.

In a statement, the urban poor group Kalipunan ng Damayang Mahihirap (Kadamay) assailed all the candidates for President for using the cash transfer program in their campaigns.

Kadamay said Roxas and Vice President Jejomar Binay have exchanged blows on how to support the program, while Mayor Rodrigo Duterte said he would triple its budget and free it from corruption and Grace Poe had said she would also support further institutionalizing the program.

Kadamay said the program is a failure. Gloria Arellano, Kadamay chair, said the program has only expanded patronage politics, especially in remote areas where politicians rule like kings over their constituents.

“It is a dole-out scheme for vote-buying and corruption,” said the Kadamay statement. Germelina Lacorte, Inquirer Mindanao with Carmel Loise Matus, Inquirer Visayas and Marlon Ramos in Manila

Read Next
6 pork lawmakers face trial
EDITORS' PICK
New 3,045 COVID-19 cases push PH total active cases to 40,074
Every Filipino home can now be a smart home with realme TechLife
How to lose a PH genius: Wesley So officially a US citizen
Nestlé Philippines’ ‘NESCAFÉ Plan’ bags Grand Anvil at PRSP 56th Anvil Awards
LTO’s P500-M deal for screws draws scrutiny
Smart reinforces superiority with best speed and mobile video experience in PH
MOST READ
Robredo on Sara Duterte leading poll surveys: Why are Filipinos drawn to leadership of this kind?
How to lose a Filipino genius: Wesley So officially a US citizen
LTO’s P500-M deal for screws draws scrutiny
Duterte on his ‘faults’: ’I just have cases of extrajudicial killings’
Don't miss out on the latest news and information.