New restrictions to be adopted to continue smog reduction in Beijing 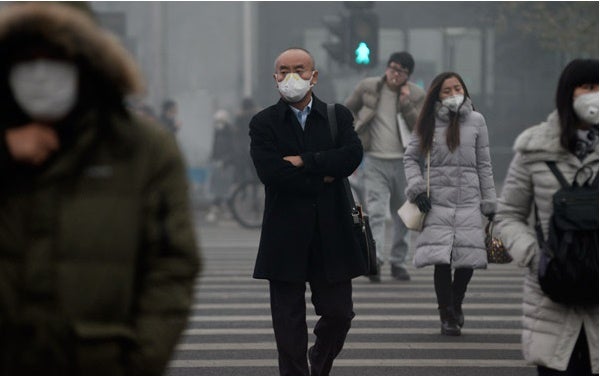 Pedestrians cross the road in Zhongguancun, Beijing, during a smoggy day in December. China Daily/ANN

Beijing is planning to tighten the use of high-emission vehicles when severe smog permeates the city and adopt different restrictions for its districts as it seeks to sustain advances in air quality registered so far this year.

The capital has seen significant improvements in air quality in the first two months of the year, and concentrations of unhealthy PM2.5 have been reduced year-on-year by 41.1 percent, to 56.4 micrograms per cubic meter, the Beijing Municipal Environmental Protection Bureau said.

PM2.5 refers to particulate matter with diameter less than 2.5 microns that poses health risks, and its concentration is a major reflection of the air quality and government’s performance in curbing air pollution.

In December, the capital was frequently hit by severe smog, driving the government to twice issue red alerts, its highest warning. Under red alerts, polluting companies and construction sites must suspend production, schools close and vehicle use is restricted, a practice that has drawn criticism from car owners.

Some expected the municipal government to extend the vehicle restrictions, which are based on an alternate-day ban on cars with even and odd numbered license plates. until March 15, the end of heating season, but this hasn’t happened.

To further control the air pollution, the capital intends to update its emergency response to severe smog within the year.

Among the modifications, Beijing is continuing its focus on vehicles with high exhaust emissions. During times of severe smog, those vehicles will be barred from city roads, the municipal environmental authority said.

Since 2013, Beijing has forced the highest polluting vehicles, the so-called “yellow-labeled” vehicles off the road.

The capital also will set differentiated restrictions based on the pollution situation in its different districts. Based on pollution data over the past years, the southern districts, including Daxing, have confronted more severe air pollution.