Poe admits meeting with NPC founder Cojuangco prior to endorsement 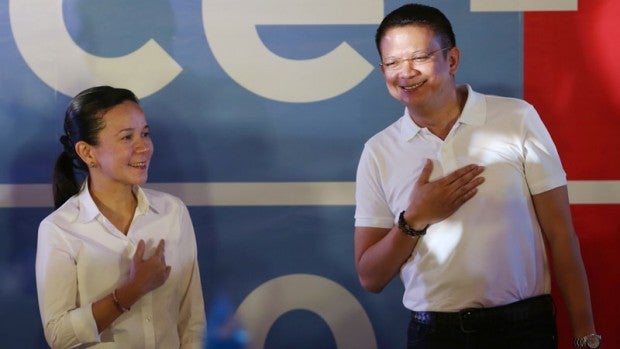 Unknown to many, Senator Grace Poe met with businessman Eduardo “Danding” Cojuangco Jr., founder of the Nationalist People’s Coalition (NPC), about two weeks before the party announced its decision to back her presidential bid in May.

Poe said it was the first time that she met face to face with Cojuangco, who also heads the San Miguel Corporation.

“I never had the opportunity to speak with him in all the years even as he knew my Dad,” she told INQUIRER.net, referring to her adoptive father, the late action king Fernando Poe Jr.

“It was a good meeting. He (Cojuangco) was very kind and soft spoken,” she added.

But during that meeting, Poe said they never discussed about the NPC.

“I did not ask nor did we discuss anything about NPC,” said the senator.

Unlike Poe, her running mate, Senator Francis Escudero said it was already a long time ago when he last talked with Cojuangco about the latter’s health.

(I had talked to him long ago but it was to check on his illness. Like what I said, from what I know, he no longer actively participates in NPC’s decision-making as a party.

Back then the one I frequently talked to regarding NPC endorsement was NPC chairman former Governor Jun Dy and NPC president Deputy Speaker Gigi Aggabao. They were the ones I frequently talked to about the party. As regards the party decisions, we only learned of them first through media while we were in Tuguegarao, then I only personally received information from Governor Dy.)

In a press conference at the House of Representatives last Monday, Aggabao, and other party leaders, endorsed the candidacies of Poe and Escudero, who are both running as independent candidates in May.

Aggabao claimed that 90 percent of NPC members preferred to back the Poe-Escudero tandem.

But some of their political opponents, including Poe’s rival, Liberal Party standard bearer former Interior Secretary Manuel “Mar” Roxas II, immediately cast doubts on the NPC endorsement, saying it was not the collective decision of the party.

Poe, Roxas, and two other presidential bets–Vice President Jejomar Binay and Davao City Mayor Rodrigo Duterte, all met with the NPC separately to get its support.

Despite the questions, Aggabao stood firm with the NPC endorsement.

The NPC president even lashed at Roxas for meddling in the affairs of the party, saying only members have the right to question its endorsement of Poe and Escudero.

(Wait a minute, I say, who is Secretary Mar to meddle in the NPC’s affairs?)

“I think it’s unbecoming for anyone to include Secretary Mar to question what the decision of the NPC is. I spoke as party president and beside me was the secretary-general,” Aggabao said, referring to Batangas Rep. Mark Mendoza, NPC secretary general.

He noted that even the NPC spokesman, Quezon Rep. Mark Enverga, was also present during the presscon.

“That should be enough for everyone, including Secretary Mar, to accept that the NPC has made a decision,” said the NPC official.

“I don’t think it will also look good for me as NPC president to start questioning let’s say any decision of the Liberal Party (LP). Inter-party courtesy na lang, they should understand what that is.”

“If there’s any one that should question the decision, it should not be them but members of the NPC. That’s how it should be,” Aggabao added.

Aggabao said the party decided to endorse Poe without the disqualification case at the Supreme Court against her in mind.

“No, no. Hindi kasama sa consideration yun (that was not among the considerations),” he said, “Ang consideration namin is we thought na si (Our consideration is that we thought that) Senator Grace, number one, of course she has all the elements that we’re looking [for] in a good presidentiable. Secondly, of course, we also took note of her electability. We feel she is very electable.”

“We made the decision without the SC case in mind, We would not want to meddle even indirectly with the case. Ours was a purely political decision of the party, meant solely to adopt Grace and Chiz with no other agenda,” he further said.

In fact, the NPC leader is confident of Poe’s victory in May once the SC decides that she is qualified to run for president.

An NPC stalwart, reelectionist Senator Vicente “Tito” Sotto III, also denied that the disqualification case against Poe was in any way considered when the party decided to endorse her.

(No, the leadership really did consult with the members. It was not considered that she could be disqualified.

There was one of us, among the highest officials, who said, but I won’t say who. When asked what if Grace was disqualified? The answer was notable: Then we won’t have a president.)

A party member, who spoke on condition of anonymity, said the SC decision whether or not in favor of Poe does not matter at all to NPC, the second largest political group in the country.

(It’s a big party. It doesn’t matter if the Supreme Court disqualifies Grace. Remember, they will still go after [the party] so the SC decision has no bearing for the party.)

Another source, who also refused to be named, said the SC decision had nothing to do with the NPC endorsement, saying the party simply bet on Poe and Escudero.

“Ibig sabihin, tumataya talaga sila. Walang kinalaman sa SC,” said the source, noting that it was the first time since 1992 that the NPC endorsed its candidates.

(It only means they’re taking a risk. It has nothing to do with the SC.

READ:  Poe on NPC’s endorsement: It’s both ‘an honor, a challenge’