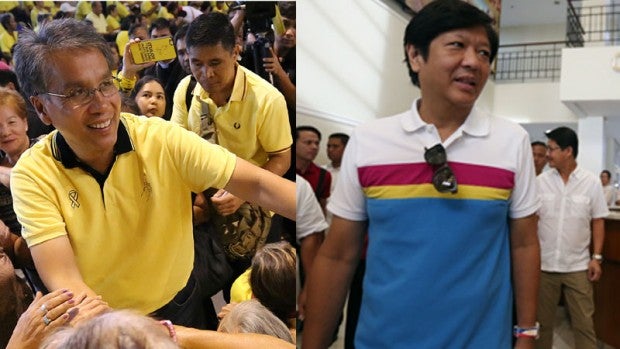 They issued the statement after the country’s second biggest political party declared that it was supporting Sen. Grace Poe for the presidency and Sen. Francis Escudero for the vice presidency.

Roxas remained unconvinced that Poe was the NPC official candidate, saying he counts at least 20 allies from the party.

“I talked to the leadership of the NPC and I was told they still have not picked a President,” he told reporters after stumping for votes in Parañaque City.

“[Poe] is the choice of a few members of the NPC. There are NPC members—more than 20 of them—including governors and congressmen who support the daang matuwid (straight path) Mar-Leni tandem,” Roxas said.

Marcos, for his part, said he was assured by his godfather, NPC founder Eduardo “Danding” Cojuangco, that members of the party were allowed to support him regardless of the official party stand.

Marcos said the party stand was not followed anyway by NPC members during elections.

“My ninong (godfather), my Tito Danding. Did he not form the NPC? Of course, I consult him in every political move I make. And he told me that he will let the members choose their candidate (for Vice President),” Marcos said on Tuesday during the second leg of his sorties in Rizal province.

Even if retired from business and politics, Cojuangco still holds sway with the second largest political party in the country, Marcos said.

“When you say NPC, you are talking about Danding Cojuangco and he is still the most closely associated with the NPC,” he said.

On Monday, the NPC announced that it had endorsed the candidacies of Poe and her running mate, Escudero.

Deputy Speaker Giorgidi Aggabao, NPC president, said 90 percent of party members supported the decision of party leaders to campaign for Poe and Escudero, who are running as independents.

But Roxas, a former interior secretary, said the endorsement of the Poe-Escudero team “is not the party stand of the NPC and that’s what the NPC leadership told me.”

Asked to name the NPC leader he was in touch with, Roxas demurred. “It’s not for me to speak for the NPC,” he said.

Roxas, the chosen successor of President Aquino, currently trails his rivals, placing fourth in a field of five candidates in the Social Weather Stations voter preference survey in early February.

He has crafted a campaign platform largely building upon Mr. Aquino’s signature policies with both negative and positive effect.

In Cainta, Rizal province, Marcos said many NPC members had committed to support him and that members of other political parties had also done so.

“Clearly, people are crossing party lines in these elections. That’s why I am still hopeful I can get the support of many NPC members,” he said.

“I think that’s what’s happening. The party is no longer followed and the voters and the local leaders look not at the party but the individual candidates and they do not totally follow the party line,” he added.

Robredo said it was “not a death sentence” even if the NPC was really supporting the Poe-Escudero team.

“Of course if he (Roxas) gets an endorsement, especially if it’s an official endorsement, that would be a good thing for him. But this is not a death sentence,” she said.

“As the campaign goes, there will be pluses and minuses. If we’re on the minus side, we need to work hard to recover the loss,” said the Camarines Sur representative.

While NPC leaders had announced their support for Poe and Escudero, party members in Negros Occidental province were for Roxas and Robredo.

In the provinces of Cebu and Bohol, members were split between Poe and Vice President Jejomar Binay of the United Nationalist Alliance.

He said Cojuangco had given them the clearance in the presence of the NPC chair, Faustino Dy II.

“We have an arrangement with the NPC hierarchy for Negros Occidental only. I cannot speak for other provinces,” Zayco said.

In Cebu, some NPC members were torn between Poe, who was endorsed by the NPC hierarchy, and Binay, who promised to give them funds.

“We have to be practical. We will go with whoever supports our group,” said Vice Mayor Romeo Villarante of Talisay City, the NPC candidate for mayor in the city.

Aside from campaign funds, Villarante said NPC members were concerned about the disqualification case against Poe, which remains pending in the Supreme Court.

Rep. Erico Aristotle Aumentado of Bohol province said that while he remained loyal to the NPC, Binay was the only presidential candidate he was able to talk to and was the most qualified to run the country. With reports from Carla P. Gomez, Carmel Loise Matus and Leo Udtohan, Inquirer Visayas