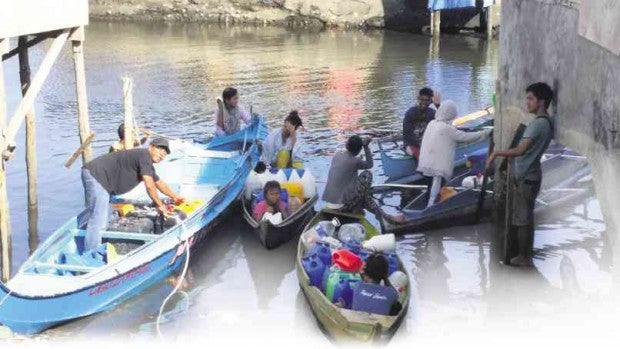 ZAMBOANGA CITY residents who are still staying in shelters for those displaced by the Moro Islamic Liberation Front occupation of the city load containers onto boats to fetch water being rationed in the city amid a continuing drought that experts say is getting worse. JULIE S. ALIPALA/INQUIRER MINDANAO

ZAMBOANGA CITY—It was a lesson about not learning a lesson.

Officials, were warned against wasting funds on artificially generating rain, declared cloud seeding a failure in easing the effects of the El Niño phenomenon in the city.

For 12 days until Feb. 28, the Philippine Atmospheric, Geophysical and Astronomical Services Administration (Pagasa) and the Philippine Air Force conducted cloud-seeding operations at a cost of P1.3 million.

But Teotimo Reyes Jr., department manager of water production of Zamboanga City Water District (ZCWD), said the effects of the drought brought by El Niño had not eased.

“We did not see or experience any increase in the water stream, the ground [remains] very dry,” Reyes said.

In January, while the cloud-seeding operations were still being planned, vegetable farmers in the city already urged authorities to abandon the idea, citing past cases and amid an admission from a weather specialist that it might actually do more harm than good.

Annaliza Pabayos, a vegetable farmer in Barangay San Roque here, said that in the past, cloud seeding killed vegetables.

“I prefer to fetch water from the river to my field,” Pabayos said.

Celestiano Ahamad, a farm caretaker in Barangay Dita, agreed with Pabayos. “Cloud seeding dries up the leaves of corn, cassava and sweet potato,” he said.

Instead of spending for cloud-seeding operations, he said, the government should allocate fuel to farmers so they can use their water pumps to draw water from rivers.

“If (cloud seeding-induced) rainwater falls on farms and through osmosis, the leaves will wither,” Enriquez said.

She said the problem could be avoided if the rain would go directly to water reservoirs or rivers because the unwanted salt could be eliminated by natural filtration.

Vasquez, however, said cloud seeding could help raise the water level in the dam that ZCWD was using.

“Cloud seeding is not a sure hit due to wind movement but we have to fill the dam,” he said.

Enriquez said the weather bureau did its best to generate rain that could restore moisture in farms and bring water to households.

The amount of rain brought by 12 days of cloud seeding, however, was insufficient to bring relief to farmers and residents suffering from the drought.

Air Force Capt. Von Ryan Timbang, who led and supervised the seeding sorties, said they flew for an average of four two-hour sorties each day.

But Reyes said the situation had not improved.

He said water level at a dam in the Tumaga River, which the ZCWD uses, continued to decline and was now below the normal operating level of 74.2 meters. At least 80 percent of the water that ZCWD supplies comes from the river.

As a result, water for the city’s consumers will be available for only seven hours a day, he said.

The destruction of farmlands is enormous, according to Diosdado Palacat, city agriculturist.

She said residents should continue praying the “Oratio Imperata,” which the Church recommends for urgent situations.

Moron, however, said that although the cloud-seeding operations had not brought relief to the city, they helped Pagasa “increase and advance scientific understanding” about cloud seeding. “We were able to test the effectiveness of the seeding agent,” he said.

In the Autonomous Region in Muslim Mindanao (ARMM), regional Agriculture Secretary Alexander Alonto said the regional government had been conducting cloud-seeding operations as damage to crops was projected to reach P140 million.

He said that at least 27,000 farmers in the provinces of Lanao del Sur, Maguindanao, Sulu, Tawi-Tawi and Basilan were suffering losses from the dry spell and its other effects, including rodent attacks.

“We can’t really prevent the dry spell and we are asking farmers to brace themselves [for the disaster] and understand what the government can offer,” he said.

A farmer in the region was reported to have committed suicide after failing to borrow money he could use to tide him over until the drought was over.

Karon expressed alarm over the increasing number of families in ARMM that were going hungry as a result of the drought.

Hataman said the regional government was distributing relief packs to areas hit by the drought.

Abugantao Saidona, a 65-year-old farmer in Maguindanao, said that while the relief packs were welcome, what he and other farmers in the province really needed was to be able to plant again.

“Right now, I hope for the rain to come,” he said. Reports from Julie Alipala and Dennis Santos, Inquirer Mindanao

Read Next
Pension elusive for Aeta guerrillas
EDITORS' PICK
Smart offers wireless fiber-like speeds to Filipino homes with country’s first 5G Prepaid Home WiFi
House OKs bill allowing married women to retain maiden surname
Pandemic prognosis: Where does it go from here?
This new condo in the South will make you want to turn a new leaf
Legarda: Ending Violence Against Women, a cause for all
Google won’t accept election ads for 2022 national polls
MOST READ
Bongbong Marcos to face another disqualification case
Christine Bersola, Julius Babao cleared of cancer after colonoscopy, endoscopy
Former PM Abe says Japan, US could not stand by if China attacked Taiwan
Tropical storm intensifies as it approaches PAR
Don't miss out on the latest news and information.