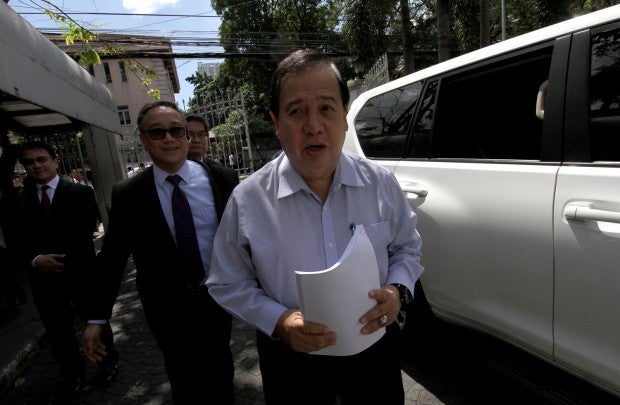 The political party of presidential candidate and Davao City Mayor Rodrigo Duterte has joined former Sen. Richard Gordon in asking the Supreme Court to compel the Commission on Elections (Comelec) to issue vote receipts for the May 9 automated polls.

The Partido Demokratiko Pilipino-Lakas ng Bayan (PDP-Laban) and lawyer Ted Contacto, who is running for Albay representative under the party, filed the mandamus petition around 3 p.m. to seek the restoration of the voter verified paper audit trail (VVPAT) feature of the vote count machines.

“There should at least be [vote] receipts, so that voters can see if their votes are accurately read by the machines, that what’s there [in the receipt] was what they wrote in the ballot,” Contacto told reporters.

The lawyer also disputed the Comelec’s stand that the issuance of vote receipts might prolong the voting process and lead to cheating.

“Our position here is, we have [automated election] laws enacted by Congress so the Comelec should comply with them. To comply with the law is not an option. What’s stated in the law, it should be obeyed for the sake of transparency. The law may be harsh but it’s the law,” he said.

Last week, Gordon and his political party, Bagumbayan-Volunteers for a New Philippines, filed a similar petition against the Comelec. The Supreme Court has already ordered the poll body to comment on the suit.

A veteran election lawyer yesterday came to the defense of the Comelec in its decision to deactivate the VVPAT feature in the counting machines, saying Gordon should blame himself over the vague requirement in the law.

In a statement yesterday, election lawyer Romulo Macalintal said that as principal author of the Automated Election Law, Gordon should be the first to know that there was no provision in the law mandating the issuance of vote receipts to voters after they cast their ballots.

“What the law mandates is for the automated election system (AES) to provide a VVPAT. Clearly, it does not speak of a ‘receipt’ as claimed by Gordon,” Macalintal said.

He cited the Supreme Court’s ruling in the Roque vs Comelec case in September 2009, in which the high court affirmed that the precinct count optical scan (PCOS) machines met the minimum capabilities standards in the “auditability of the election results.”

The high court stated that the PCOS machines, being a paper-based technology, affords audit since the voter would be able to verify if the machine had scanned, recorded and counted his vote properly through the official ballot, said Macalintal.

In his petition for mandamus, Gordon argued that Comelec cannot use its “speculative yet baseless” fear of vote buying in case of the implementation of the VVPAT as a valid excuse to ignore the mandate of the law.