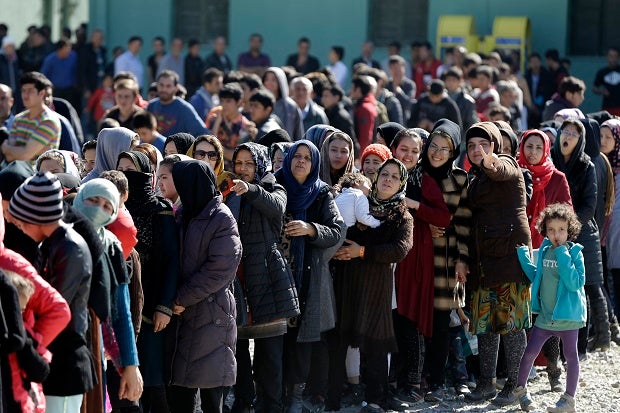 Refugees and migrants, mostly from Afghanistan, wait in queues to receive food distributed by the Greek army at a transit camp in the western Athens’ suburb of Schisto, Thursday, Feb. 25, 2016. AP File Photo

VIENNA, Austria—Austria’s government hit back on Monday at “absurd” criticism of its tougher migrants policy, after coming under fire from Germany and Greece where a bottleneck is building due to Vienna’s measures.

“We don’t have to take criticism from anyone on any side,” Interior Minister Johanna Mikl-Leitner told the Austria Press Agency.

“Apparently for some the European solution (to the crisis) is for all (the migrants) to mass in Austria,” she said.

At a meeting in Vienna last week, it persuaded nine countries along the well-trodden path for migrants from Greece through the western Balkans towards Austria and beyond to impose tighter controls too.

Neither Greece, where thousands of migrants have become stuck as a result, nor Germany were invited to the talks, underscoring the deep rifts within the EU as it faces the biggest influx of migrants since 1945.

Germany in particular has criticised the limit on the number allowed to pass through Austria as being too high, but Mikl-Leitner said that Germany itself had imposed daily caps in December, leading to “huge backlogs” in Austria.

German Chancellor Angela Merkel on Sunday said she found Austria’s “unilateral” decision “a little unfortunate” and described how it derailed a timetable for a series of EU measures and meetings to tackle the migrant crisis.

She said Vienna’s move came just before a February 18 EU summit and led her to insist that leaders move forward their next Brussels debate on the issue from a regular March 18 summit to next on March 7.

“If Austria had not taken this decision, we could have waited until our regular March 18 Council,” she said, allowing time to see results from several measures, such as a NATO surveillance mission in the Aegean Sea to stop refugee boats.

Austria says that its measures and those of Balkan countries, which are only allowing 580 migrants to enter per day, are necessary because efforts towards a common EU policy have failed so far.

Relations between Austria and Greece have soured dramatically, with Athens withdrawing its ambassador and Austria’s Chancellor Werner Faymann on Sunday accusing Greece of “behaving like a travel agency” for migrants.

EU president Donald Tusk will meet Faymann in Vienna on Tuesday as part of a visit to several Balkan countries in a bid to heal the deep divisions over how to tame the migrant crisis.