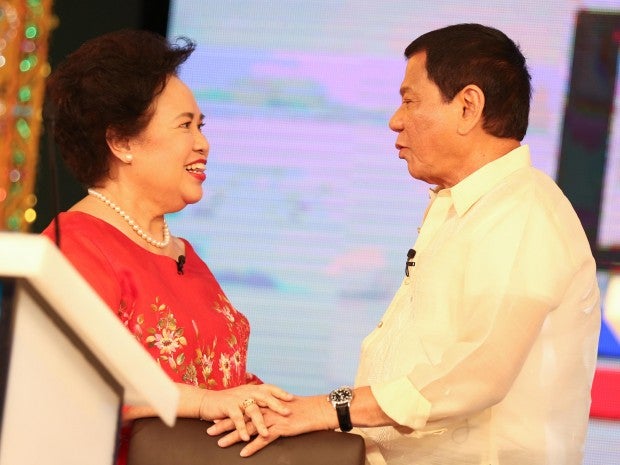 INQUIRER.net revisits the first official presidential debate, held a week ago Sunday, with a behind-the-scenes look at each of the five presidential campaigns. This second part, out of five, focuses on Senator Miriam Defensor Santiago.—The Editors.

Miriam Defensor-Santiago is always on time, but on the day of the first official presidential debate in 24 years, she is running behind schedule. Due to a change of aircraft and air traffic congestion, the 9:35 a.m. Philippine Airlines flight to Cagayan de Oro City is delayed by an hour and 35 minutes.

The plane finally lands past noon, just a few hours before the 5 pm start of the debate. From Laguindingan Airport, it takes an hour to reach the city. By the time she reaches Capitol University, the venue of the debate, she would have been exhausted—just like any other passenger who would have gone through the stress of delays, especially someone who is 70 years old. But in her opening statement at the debate, the senator comes out in fighting form.

“Even though my flight was delayed, I’m still happy to get here. I’ve wanted to swim from Laguna Bay just to get here,” she says in Bisaya, to loud applause.

At the most-awaited square-off inside Capitol University’s auditorium, it is clear that Santiago’s mind is still sharp, but she is also visibly frail. She sits down several times, especially when it isn’t her turn to speak. Her four rivals for the presidency remain standing. Her voice also wavers at times. Is it her stage 4 lung cancer that she says she has already beaten?

“I just have trouble getting up and sitting down because of the pinched nerve in my lower back. Many people have had that experience so they understand,” she tells a television reporter after the program.

The very first issue thrown at Santiago is her health. She turns indignant.

“Don’t you know that illnesses come and go? You ask why I’m running but that’s my right under the Constitution. There is no constitutional provision that says if you get sick of something you are disqualified….I was waiting to die but my guardian angel did not let me,” she tells moderator Jessica Soho.

The crowd laughs. This is exactly why she makes good copy.

A good friend of hers who is also running for president, Davao City Mayor Rodrigo Duterte, chooses not to argue with the feisty senator over the health issue.

“I will not go into a debate with Ma’am Miriam. I do not see Senator Santiago passing away in the next 20 years so there is no problem,” he says in his “rebuttal” period.

The two friends go way back. Santiago says that Duterte was one of the sponsors during her 25th wedding anniversary.

“When I am in Davao I always try and pay him a visit for only a social purpose, nothing political. I’m always happy to see him. He’s always been a gentleman with me,” she tells this reporter.

When the senator gets on stage for the debate, Duterte approaches her and gives a salute. They kiss and hug one another. These scenes are quickly turned into memes and then go viral around the Internet.

Their mutual admiration that is apparent during the event gives birth to the “love team” which netizens dub “Duriam” by the end of the two-hour telecast.

‘Promises in the sky’

Santiago is fearless in criticizing the plans of her opponents in reducing poverty.

“Well, promises are very easy to make but which president of our country, just like us presidentiables for 2016, has ever abolished or at least reduced the incidence of poverty in our country? None. I say this with all conviction as former Agrarian Reform secretary. You keep on making promises, but where will we get the funds for these programs? That is the question,” she says in response to Sen. Grace Poe, who plans to provide a free feeding program for public schools and subsidies for the agriculture sector.

But Poe, a freshman senator, tells her this is exactly why we need a new leader.

In her counter-rebuttal after their exchange on poverty reduction, she tells administration-backed Mar Roxas: “These are all promises way up in the sky. Promises in the sky is the program of many government officials running for public office.”

When political dynasties are discussed, she trades barbs with Vice President Jejomar Binay, who has children in elective positions. In a tense moment caught by the audience in the auditorium, she glares at him after he casually mentions that she too has a son in public office. (He was referring to Narciso Santiago III.)

“What he said was wrong. My son ran for a party-list [seat] but did not run for another post after one term,” she says when asked to answer the allegation.

In this presidential debate she was expected to shine because of her intellect and experience. This was supposed to be her strongest suit, after all. Her official biography describes her thus: Santiago is “one of the most intellectually brilliant leaders that our country has ever seen.

She is also the only presidential candidate who has served in all three branches of government. She has been called the incorruptible lady, the tiger lady, the iron lady of Asia. A recipient of the Magsaysay Award, the Asian equivalent of Nobel Peace Prize, she was “class valedictorian at all levels”—and also the first Asian to be elected judge of the International Criminal Court.

In the end, however, analysts are divided. What is certain is that she did not completely win the first presidential debate.

What does it take to be president? Santiago says a candidate should exemplify academic, professional and moral excellence.

The campaign trail is not new to her. It is her third time to run for president. In 1992, she came in a very close second, and up to this day maintains that she was cheated by Fidel V. Ramos’ black operations. In 1998, when Vice President Joseph Estrada led almost all surveys from start to finish, she ended up 7th.

Has the debate given a boost to her campaign? She has consistently been at the bottom of the recognized surveys. But in campus surveys, she is almost always in the lead. As in 1992, she is relying on the youth vote; the main difference now is her strong social media presence.

But Santiago is not bothered by her standing in pre-election surveys. She tells this reporter in a low voice: “You know as well as everybody does that I did not start to campaign until the formal start of the campaign period on Feb. 9 because that’s what the law says. So I want to go around the country and point to them and tell the people do not elect people like that [those who started campaigning even before it was legal to do so]. They are not yet in office and they are already violating the law.” JN