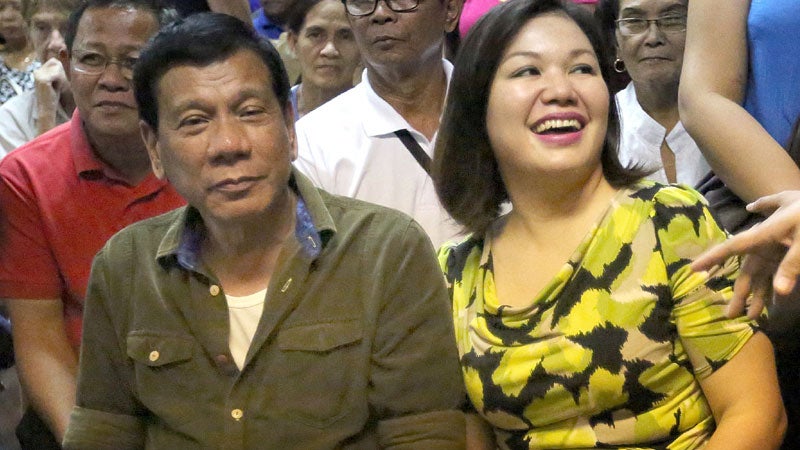 IT WAS a pretty swank affair at the Manila Golf Club in Forbes Park: Ostensibly a Laurel family get-together, it was actually a fund-raiser for presidential candidate Rodrigo Duterte.

It was the day after the first presidential debate, after which everyone seemed to agree that Duterte did better than expected. Apart from members of the tight-knit Laurel clan, a few invited guests such as actor Cesar Montano and President Aquino’s aunt-in-law Tingting Cojuangco were spotted in the crowd. There was no shortage of Duterte boosters, but many of the guests were there to see for themselves if the tough-talking Davao City mayor was the real deal, or just another lying politico.

In short, it was a golden opportunity to rack up some votes and shore up support from an influential and well-heeled sector of the electorate.

Only one problem: The candidate was still in Cagayan de Oro, stuck at the airport where traffic on the runway was backed up, and he was already two hours late.

Lucky for him, his partner had flown in ahead to pick up the slack. And we don’t mean his running mate, Sen. Alan Peter Cayetano.

Duterte’s public image paints him as an ultra-macho alpha male, and he has publicly admitted to having a string of girlfriends. When his first marriage to Elizabeth Zimmerman ended in annulment, his “philandering” was cited as one of the reasons. Because of this, a lot of people assume that his current partner must be some kind of meek, subservient doormat to put up with him.

Cielito “Honeylet” Avanceña, Duterte’s common-law wife, proved to be anything but. Dressed in a long-sleeved print blouse and brown slacks, she struck just the right tone, coming across as unassuming but assured. She spoke to the crowd for nearly 30 minutes, and fielded questions, speaking plainly.   Without sounding too much like a politician, she stayed on message, as the spin doctors like to say, and allayed some concerns about the candidate.

Duterte talked tough because Davao is a tough place, and he had to be tough to make it a place conducive for business. But his choice of words wasn’t always the best, she admitted.

He couldn’t be a dictator, as some people fear, because it wasn’t his style, and he wouldn’t be as loved by the people of Davao if he was dictatorial.

Despite his reputation as a ladies’ man, he wasn’t a male chauvinist because he had too much respect for women: He has appointed women to high positions in the Davao City administration, supported his daughter Sara when she was mayor and made Davao City a leader in supporting battered women.

As for the rumored girlfriends, she would have left him long ago if this were true, Avanceña said.

“Hinamon ko na siya ng hiwalayan, just in case meron talagang totoo, ayaw naman niya,” she said. “Talagang friendly siya sa women. Babae ang lumalapit sa kanya. Pati lalaki nagpapa-selfie. Pati bakla. Hindi naman siya gwapo, bakit ganoon ang charisma niya sa tao? (I challenged him to a separation just in case he had another girlfriend, but he didn’t accept it. He’s really friendly with women and it is them who approach him. Even guys take selfies with him, even gays. He’s not handsome, but he has this charisma).”

Avanceña also managed to work in a few intimate details about the private Duterte that would have sounded hokey coming from him, or anyone else:

He reads the Bible and prays for God’s guidance (a recent development, she admitted, at her prodding). He sometimes goes without sleep and skips meals to attend to Davao’s needs. He prefers to eat and live simply and loses his appetite when too much food is on the table. And he still cries when he visits his mother’s grave.

At the end of her talk, Avanceña had the crowd eating out of her hands. Since when do people line up to get their picture taken with the candidate’s wife? If this was calculated, it was a stroke of brilliance. If not, a stroke of luck.

Until recently, Avanceña had kept herself pretty much out of the media spotlight. But as the presidential campaign shifts to high gear, she’s had to take a more prominent role, sometimes accompanying Duterte in some sorties, sometimes staying in Davao to keep an eye on things while he was away on the campaign trail.

Her increased visibility has raised the public’s curiosity about her.

Some of the bare facts: At 46, she’s nearly 25 years younger than the 70-year-old Duterte. He was her first serious relationship, she said, although she turned vague when asked how old she was when they first met.

So how come they’re still not married?

(It’s probably more complicated than that: Duterte is said to be still close to his first wife, who was diagnosed with cancer last year.)

She was trained as a nurse, and worked for four years in the US, where her Hispanic coworkers used to tease her about her name (Cielito means “Little Heaven” in Spanish.)

Her nurse’s training comes in handy because of Duterte’s health issues, which are public knowledge: He suffers from Buerger’s disease, a potentially serious constriction of the blood vessels in the limbs caused by smoking, and occasional migraines. But his blood pressure is actually better than hers, she said, and she can assure the public that he is fit for active duty, if elected.

She returned to Davao from the States shortly after their daughter was born (which makes Veronica, now 11, a US citizen). She runs several businesses in Davao, including donut franchises and a meat shop, apart from keeping house for her family.

Losing her privacy, she said, remains the hardest part of supporting her partner’s presidential bid. She used to roam Davao City’s malls on her own, without a bodyguard. But last week, she complained, an Al Jazeera TV crew embedded itself into her household and filmed them for days, even when they were eating lunch.

She has resigned herself to being in the public eye, and she seems ready for prime time. But is she ready for Malacañang, should Duterte win? In interviews, he has said that he would make daughter Sara first lady.

That would mean having to leave Davao and her businesses behind.   “Bahala na ang Diyos kung saan kami ilagay. (I’m leaving it up to God where he wants to put us),” she said.

By the time the candidate finally arrived on the scene, the sun had gone down and half the people had left. But all things considered, it felt like a win.