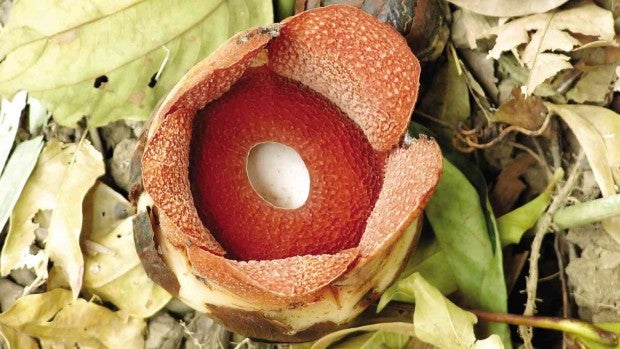 BIG IS SMALL FLOWER The “Rafflesia consueloae,” recently discovered on two sites in Nueva Ecija province, could be the world’s smallest species of the giant Rafflesia flower. (See story below.) EDWINO S. FERNANDO/CONTRIBUTOR

A NEW but much smaller species of Rafflesia, the world’s biggest flower, had been found on two sites at the Pantabangan watershed area in Nueva Ecija province.

While the parasitic plant can reach a diameter of up to 1.5 meters, the Rafflesia consueloae has an average diameter of only 9.73 centimeters (3.8 inches) and now holds the world’s record for being the smallest among giant flowers. Discovered by a team of UP biologists near the Pantabangan Masiway Hydroelectric Power Plant (PMHEP) in Nueva Ecjia, the Rafflesia consueloae can be found only in the Philippines and so far thrives only on Mt. Balokbok and Mt. Pantaburon, Nueva Ecija, which are two kilometers apart.

The amazing discovery was published in the open access journal PhytoKeys on Feb.25, 2016.

Professor Perry S. Ong, a UP biologist and lead researcher of the study, described the discovery of the new species as serendipitous as it happened when a field assistant accidentally kicked over a pile of forest litter, exposing a decayed flower of R. consueloae, which was about the size of a baseball when in full bloom.

The new species has been classified as critically endangered, according to the International Union for the Conservation of Nature and Natural Resources, with its survival threatened by wildlife hunting and forest fires during the dry season.

Unlike other Rafflesia flowers which smell like carrion, the fruit of the R. consueloae flowers smell like young coconut meat, according to the researchers.

The R. consueloae thrives at the Pantanbangan-Carranglan Watershed where the Pantabangan Hydroelectric Dam is located, and is currently operated by First Gen Hydro Power Corp. (FGHPC).

In fact, the flower was named in honor of Consuelo “Connie” Rufino Lopez, the wife of Filipino industrialist Oscar M. Lopez and the mother of Federico R. Lopez, First Gen chair and CEO.

“With her demure, but strong personality traits, which the Rafflesia consueloae also possesses, she provides the inspiration for Mr. (Federico) Lopez’s pursuit of biodiversity conservation in the Philippines,” Ong said.

The FGHPC together with UP Biology and the Diliman Science Research Foundation (DSRF) had been undertaking a long-term biodiversity conservation and monitoring program in the watershed to protect it and the environment in general. The monitoring program started in March 2011, while the Rafflesia monitoring began immediately after its discovery in February 2014.

Aside from UP’s Institute of Biology and the DSRF, the Department of Forest Biological Sciences of UP Los Baños also helped in the research.

Through the installation of a motion-activated camera, the research team was able to document the different phases of the life cycle of the R. consueloae year round.

Researcher John Michael Galindon of UP Biology and DSRF observed that the flowers can be found only in the roots of an unidentified species of Tetrastigma, a vine that belongs to the grape family. He also noted that not all Tetrastigma vines have Rafflesia buds, much more flowers, while a single vine can have multiple flowers in various stages of development.

“Rafflesia flowers are unique in that they are entirely parasitic on the roots and stems of specific Tetrastigma vines in the forests and have no distinct roots, stems, or leaves of their own,” explained coauthor, professor Edwino S. Fernando of UPLB FBS. “Thus, they are entirely dependent on their host plants for water and nutrients.”

According to Ong, considering how tough the bark of Tetrastigma is, it remains a mystery how tiny Rafflesia seeds can penetrate it to complete its life cycle.

While male and female flowers of R. consueloae have been found, some individual flowers have been encountered that contain both male and female parts. Whether these are functional or not is part of the mystery that needs to be unlocked, Fernando said.

The record of the largest flowers in the world belongs to Rafflesia arnoldii from Sumatra and Borneo, which can grow up to a diameter of 1.5 meters. In the Philippines, Rafflesia schadenbergiana, found only in Mindanao, is still large with its flowers reaching a diameter of 0.8 meters. The Rafflesia consueloae is the sixth species of the giant flower from Luzon island and the 13th for the entire Philippine archipelago.

Meanwhile, the Department of the Environment and Natural Resources-Biodiversity Management Bureau (DENR-BMB), in partnership with UP Biology, said it was undertaking the Wildlife Forensics and DNA Barcoding of the Philippine Biodiversity Program. The program is currently studying the DNA barcode of R. consueloae and its host Tetrastigma, the species of which remains unidentified.