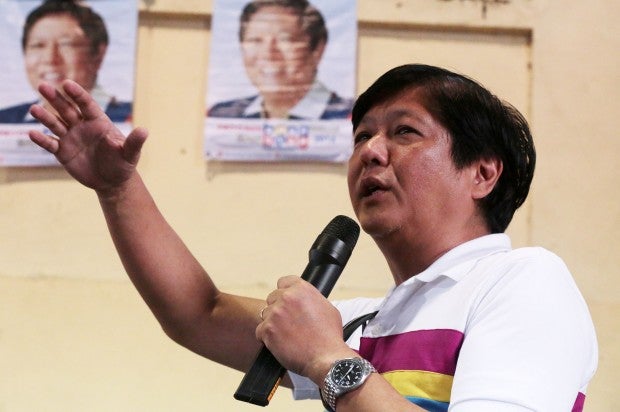 “I’m [running for] vice president. [If I win, I could not do the things that the president does,” Marcos told reporters here during the second stop of his eastern Pangasinan sortie on Friday.

He was reacting to criticisms that if he wins the vice presidency, he could repeat the same iron-hand rule of his father, the strongman Ferdinand Marcos.

President Aquino, in his speech during the 30th celebration of the Edsa People Power Revolution on Thursday, talked about moves about countering attempts to revise history, saying the martial rule of the late dictator was “a painful chapter” and not a “golden age.”

He said that “if he (Marcos) cannot even see the wrong in what his family did, how can we be confident that he will not repeat [these wrongdoings]?”

But Marcos countered: “You have to ask those who are afraid, why they would be afraid of me. I’m doing my work to continue serving the people the best I could.”

At the Clark Freeport in Pampanga province on Friday, Marcos found an ally in his cousin, senatorial candidate Martin Romualdez, amid a campaign being waged by martial law victims against his vice presidential bid.

“Bongbong had no role in the framing of martial law. And there is no administration that is perfect,” Romualdez, a Leyte congressman, told a forum of the Capampangan in Media Inc.

“[It was] never a policy of Ferdinand Marcos to use torture like Nazi head Adolf Hitler…There was no policy to do evil [and commit] human rights violations,” Romualdez said. Gabriel Cardinoza, Inquirer Northern Luzon, and Tonette Orejas, Inquirer Central Luzon