Robredo confident LP will not drop her from campaign 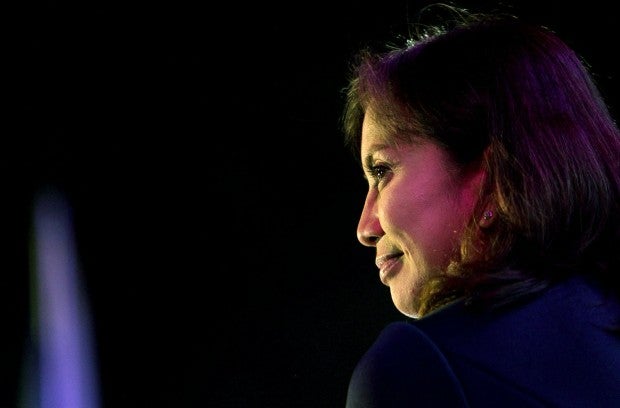 Administration vice presidential bet Leni Robredo dismissed rumors that the Liberal Party has plans of dropping her if her ratings in preference surveys will not improve.

Robredo expressed confidence that ruling party will keep her in the coalition even if she would continue to trail behind her rivals for vice president.

(I don’t believe in junking. I think that even if my numbers do not improve, that [junking] won’t happen. I completely trust in the party and their support for me.)

Malou Tiquia, founder of a campaigns management firm, posted on Facebook that “two different but credible sources” said Robredo might be junked by LP “if she does not pick her numbers.”

The political strategist, who is known to be supporting Vice President Jejomar Binay for presidency, said the congresswoman’s rankings has improved but “she (Robredo) is plateauing…because there is not enough support to get her message out.”

(When I was slumping in the surveys, I was supported, that was only 1%. What more now that my rating has improved. That won’t happen. I am with the party every day and I see the support they give me.)

If she would have a chance to speak to Tiquia, Robredo said she would assure her that she has her full trust for the party.

No other plan but to win

For his part, Roxas said there’s no truth to the claims of Tiquia’s sources and that he and Robredo have no other plans but to win the elections.

(I will just clarify. There is no truth to what they are saying. We have no Plan B, Plan C, D, or any other plan. Our plan is to win because what we are standing on is the solid foundation of clean, orderly and honest government.)

READ: LP: There is no Plan B; it’s Leni Robredo or bust

Meanwhile, the spokesperson of the administration coalition said Tiquia is merely trying to create a rift between Roxas and Robredo.

(What I know is that she supports Cong. Leni but she supports Binay for the presidency. So, perhaps she has an agenda here to create a rift between Sec. Mar and Leni. But that won’t work.)

Gutierrez assured that the LP has no plan at all to drop Robredo from the coalition.

(I don’t know who she has talked to, what her motive is, but what is clear is that [what she says] isn’t true.) CDG