‘Edsa about right vs wrong’ 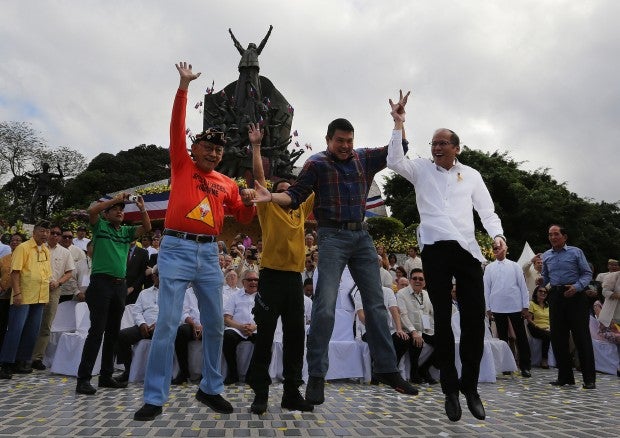 As if guided by his martyred father whose statue stood behind him at the People Power Monument, President Aquino led the celebration of the 30th anniversary of the Edsa People Power Revolution Thursday by countering attempts to revise history, saying martial law was “a painful chapter” and not a “golden age,” as The New York Times put it in a front-page article.

The only son of democracy icons Ninoy and Cory Aquino, the President also took to the stage to warn people that Sen. Ferdinand “Bongbong” Marcos Jr. could replicate the iron-fist rule of his father, the late dictator Ferdinand Marcos.

Yellow and white confetti rained on the crowd of several thousands who gathered at the People Power Monument to recall the glorious day when Filipinos drove away the Marcoses in 1986, but the prospect of Senator Marcos being elected  Vice President, a doorstep away from Malacañang, hovered like a dark cloud.

Around 500 protesters blasting the Aquino administration for purportedly allowing the Marcos resurgence briefly clashed with riot police on Edsa after the celebrations, but no injuries were reported.

In his speech, President Aquino belied Senator Marcos’ claims that the Philippines saw its best years during his father’s rule.

“As part of the generation who suffered under the dictatorship, I tell you just as directly: The time we spent under Mr. Marcos was not a golden age,” Mr. Aquino said.

“It remains one of the most painful chapters of our history—it was why so many of our countrymen mustered the courage to gather at Edsa and in other places outside Metro Manila, armed only with their faith and their principles,” he said.

“We were able to unite as one people, and by the grace of God, we toppled the dictatorship without resorting to a bloody civil revolution,” he said.

“Today, if the surveys are right, then the son of the dictator who still cannot see the mistakes of the past has an increasing number of supporters,” Mr. Aquino said.

“If that is right, then does it also mean that we have forgotten what we once said, ‘Enough is enough; we have had it out with the lot?’” he said.

“Does this mean that, today, we are being asked, ‘Can we give the possibility of martial law taking power once more, and repeating all its crimes?’” he said.

“It is also true that the sins of the father should not be visited on the son,” Mr. Aquino went on.

“At the same time, what I cannot understand: The dictator’s own blood had all this time to say, ‘My father did the country wrong; give us the chance to make it right,’” he said.

“And yet, just think, this was what he said, ‘I am ready to say sorry if I knew what I have to be sorry for.’ If he cannot even see the wrong in what his family did, how can we be confident that he will not repeat the same?” he said.

“All I can say is, thank you, because you have at least been honest in showing us that you are ready to emulate your father,” the President said.

“Do not [get me wrong]: This is not about the Aquinos versus the Marcoses; it is clear to me that this is about right versus wrong,” he added.

As an example of the likelihood of the senator doing as his father had done, Mr. Aquino said Marcos, along with Sen. Juan Ponce Enrile, derailed the proposed Bangsamoro Basic Law (BBL).

“And is it not true these two surnames were the ones who pushed for a military solution against the Moros during the dictatorship?” Mr. Aquino said, pointing out that the late dictator tolerated land grabbing in Mindanao, which was one of the biggest injustices to the Moro people.

Acknowledging that the efforts at revisionism had partly succeeded in fooling a number of young Filipinos, the President devoted nearly a third of his speech to recounting the horrors of martial law that his family and others experienced as well.

Nearly half of those at the monument were the so-called millennials, young people born after 1986.

The theme of the 30th anniversary of the bloodless coup that inspired similar movements across the world was for them—about the passing of the torch, for them to continue the change that their elders began at Edsa.

The President said the young enjoyed  “different kinds of freedom” today—from being able to travel without having to be watched by authorities, having no state-imposed curfews to being able to access information from smartphones.

Lucky to be alive

He said the young were now “enjoying the freedoms that were taken away from the generation that came before you—where, if you reached your 30th birthday while fighting against the dictatorship, you were already lucky to still be alive.”

“Now, at 30 years old, your professional life has just started. You have the freedom to earn and to save money, to love and to start a family—the freedom to dream,” Mr. Aquino said.

“You will benefit the most if we are able to protect our freedom so, God willing, you understand the responsibility you bear. God willing, we will all do our part so that darkness will never consume the Philippines once more. God willing, the freedom we so long dreamed of, will never, ever be taken away from us once more,” the President said.

He emphasized that the abuses of the dictatorship were neither “products of imagination” nor just the opinion of some.

“Martial law actually happened. There was a dictator who, along with his family and his cronies, abused his position, and the price for this was the lives and the freedom of Filipinos,” Mr. Aquino said.

The President said he expressed disappointment whenever he was told that there were those who say that the time of Marcos was the “golden age of the Philippines.”

In a lengthy article, “Yearning for the ‘golden age’ of Marcos, The New York Times said that fading memories were benefiting the dictator’s son in his vice presidential bid.

“In fact I have wondered: We have both been President—where might our country be today if he had just stayed true to his mandate during his time in office?” Mr. Aquino said.

The President said that under his administration that followed the “straight and righteous path,” 7.7 million Filipinos had been lifted from poverty.

The poorest 40 percent of the country receive free treatment from public hospitals.

The country has the lowest unemployment rate in a decade.

Mr. Aquino said infrastructure that took “decades in the making” had finally been completed under his term, such as the 180-meter Aluling Bridge in Ilocos Sur province that took 35 years to build.

“Let me ask: Is it right to play at being blind, especially now that we have a government that truly cares for the citizenry?” he said.

“I believe that it is not our fate to repeat the grim parts of our past; our fate is the sum of the decisions we make in the present,” the President said.

“I believe in the greatness of our people. I believe that, even if we are known for our patience, it has its limits—and if those limits are reached, then no one will be able to stop the wave of solidarity that will follow,” he added.

Loretta Ann Rosales, former chair of the Commission on Human Rights, Thursday said during a visit at the People Power Experiential Museum at Camp Aguinaldo, “Let us never allow the Marcoses to return. We should not let another Marcos again in Malacañang.”

Rep. Leni Robredo, the Liberal Party’s vice presidential candidate, told reporters: “If you don’t have acceptance of the wrongdoings done before, you are bound to repeat these once you are given power.” With a report from Julie M. Aurelio