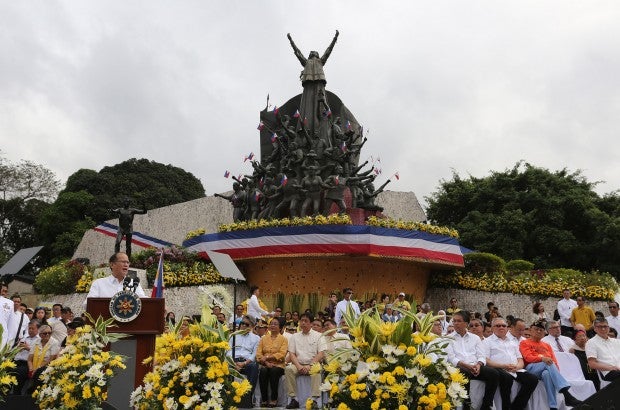 President Benigno  Aquino lll delivers his speech at the front of the People Power monument during the 30th anniversary celebration of the Edsa revoulution.  JOAN S. BONDOC

THREE decades after the historic 1986 Edsa People Power Revolution, Vice President Jejomar Binay on Thursday said the Philippines became poorer under the administration of President Benigno Aquino III, whose mother symbolized the bloodless uprising that toppled dictatorship in the country.

(It’s saddening because we have been facing the problem of poverty for 30 years now. We have become poorer because of the current administration.)

The opposition leader said the administration’s claims of a good economy were not translating to improved lives of millions of Filipinos.

“Ayon sa statistics, lalo tayong naghirap (If you look at statistics, we have become poorer), especially if you take the pronouncement that we have a good economy, that we have lots savings… underspending results [in] under-performance,” Binay said.

“’Yung budget sa health hindi ginagastos, tama bang pamamahala ‘yan (We are not spending the budget on health. Is that the right kind of leadership)?” he added.

Binay also zeroed in on poverty in his speech in Tiaong, Quezon and expressed disappointment over the administration’s alleged lack of compassion for the poor.

Binay and the rest of the United Nationalist Alliance slate also visited Sariaya town and Lucena City. They are set to woo voters in Tayabas, Lucban, and Mauban on Friday.

The Vice President said he skipped the 30th anniversary rites of the Edsa revolution in Manila because he did not receive an invitation.

Binay, who is seeking to succeed Aquino in the upcoming elections, said the spirit of the Edsa revolution would be best commemorated by the desire to uplift the lives of Filipinos from poverty toward the attainment of “true democracy.”

(Let us not forget what we fought for in Edsa. As what I have told you, it is the desire to uplift lives from poverty and attain true democracy.)

Binay, a human rights lawyer and activist during the Marcos regime, was an ally of Aquino’s mother, the late democracy icon and former president Corazon Aquino, who appointed him as officer in charge of Makati. IDL/AC