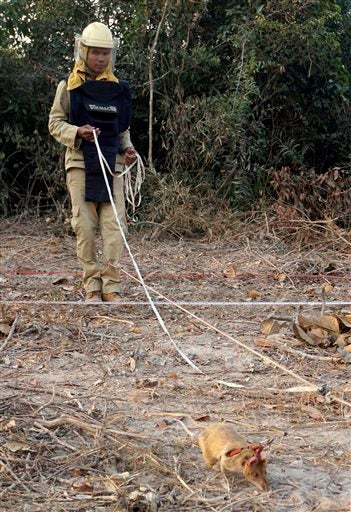 In this Feb. 19, 2016, photo, handler Ok Chann guides mine-sniffing African rat Cletus across a suspected mine field. in Trach, Cambodia. African rats are the latest weapon enlisted to clear Cambodia of up to 6 million mines and other pieces of unexploded ordnance that continue to kill and maim rural dwellers. AP

TRACH, Cambodia — It’s been a busy morning for Cletus, Meynard, Victoria and others of their furry band. Tiny noses and long whiskers twitching, they’ve scurried and sniffed their way across 775 square meters (8,300 square feet) of fields to eliminate a scourge that has killed thousands of Cambodians: land mines.

Meet the Hero Rats: intelligent, surprisingly adorable creatures with some of the most sensitive noses in the animal kingdom. Sent from Africa, where they successfully cleared minefields in Mozambique and Angola, they began the same task in northwestern Cambodia early this month and have already scored tangible results.

Two hectares (4.4 acres) have been declared mine-free around this village where more than 15 people have been killed or wounded by the explosives, forcing some to abandon their homes and rice fields and seek jobs elsewhere.

One villager, Khun Mao, says the rats have been sniffing for suspected mines in a rice field he had been afraid to cultivate for years. He says that while it is too soon to say whether the rodents can remove every mine, “To me, these rats are wonderful.”

“The villagers have started to get excited about farming their land again. You can see the light in their faces,” says Paul McCarthy, Cambodia program manager for the Belgian nonprofit organization APOPO, or Anti-Personnel Land Mines Detection Product in English.

On a recent morning, the African giant pouched rats were working two suspected, taped-off minefields. Each rodent wore a harness connected to a rope strung out in a straight line between two handlers standing about 5 meters (15 feet) apart and outside the danger zone.

The rodents then darted from one handler to the other, constantly sniffing the ground and only taking time out to scrub their bodies with tiny front paws or to answer nature’s call. The handlers moved a step or two down the field to repeat the process, and a second rat was later sent over the same terrain to double check. 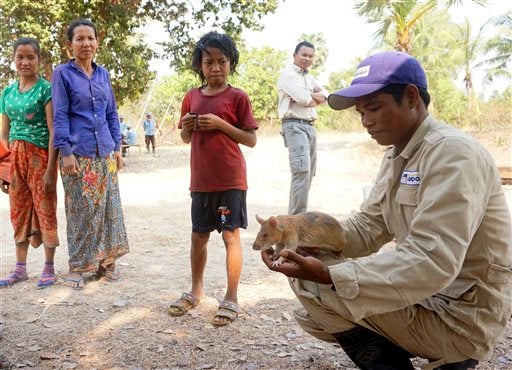 In this Feb. 19, 2016, photo, a handler shows off one of the rats to villagers who are grateful that these creatures from Africa are beginning to clear their fields of the mines which have taken their lives and injured others, in Trach, Cambodia. Tiny noses and long whiskers twitching, they’ve scurried and sniffed their way across 775 square meters (8,300 square feet) of fields to eliminate a scourge that has killed thousands of Cambodians: land mines. (AP Photo/Denis Gray)

At the second field, Merry and Meynard were completing three hours of effort as a midday sun beat down on the parched earth. The duo had earlier nosed in on an explosive, halting just above it and scratching the ground — the learned response when a rodent detects TNT inside a land mine. A deminer with a detector followed and the mine was dug up and detonated.

Unlike standard mine detectors, the super-sniffers pick up only TNT and not other metal objects. And unlike wage-earning humans, the rats work for peanuts — and their other favorite, bananas. 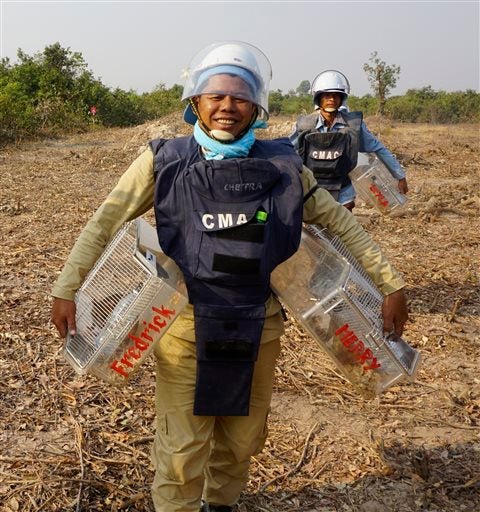 In this Feb. 19, 2016, photo, Phann Phat, left, one of a 34-member mine detecting team, carries two rats, Fredrick and Merry, from a mine field where they use their keen sense of smell to detect TNT inside buried land mines, in Trach, Cambodia. (AP Photo/Denis Gray)

Theap Bunthourn, operations coordinator for the 34-member team, cited other advantages of using rats: They are cheaper to acquire and train than mine-sniffing dogs and easier to transport. Rats, averaging 1 kilogram (2.2 pounds), are also too light to detonate a pressure-activated mine, though dogs avoid that danger by staying a few feet away from the explosives they detect.

Each rat can clear an area of 200 square meters (2,150 square feet) in 20 minutes, something a technician with a mine detector would take 1 to 4 days to complete. Their sense of smell is so keen that in Africa they are also used to detect tuberculosis in human sputum samples at a rate much faster than the standard laboratory method. 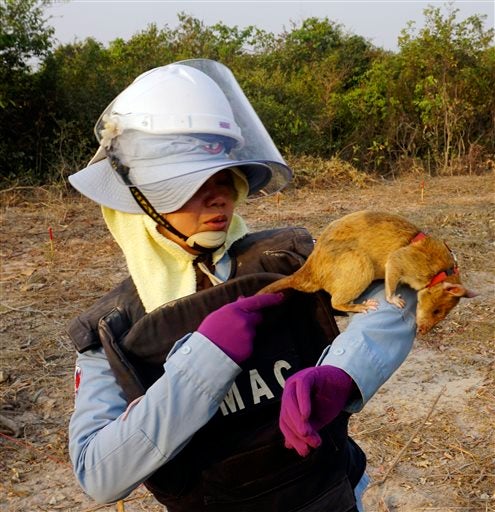 In this Feb. 19, 2016, photo, Cambodian team member So Malen plays with Cletus after he scampered across a field believed to be sown by mines in Trach, Cambodia. African rats are the latest weapon enlisted to clear Cambodia of up to 6 million mines and other pieces of unexploded ordnance that continue to kill and maim rural dwellers. (AP Photo/Denis Gray)

Unlike dogs, the rats don’t get attached to their handlers and thus can be rotated among many, Theap Bunthourn says. But McCarthy, an ex-British Army demolitions expert, recalls watching the student rats “following their trainers like puppies, stopping when they stopped.”

Critics say that rats may offer a lower level of guarantee that an area is mine-free than man-and-machine techniques, that the animals cannot search well in thick vegetation and can only work for relatively short periods in the heat.

“I would never discard any asset that could prove useful, but I can’t envision hordes of rats wiping out minefields in Cambodia,” says Greg Crowther, who heads the U.K.-based Mines Advisory Group in South and Southeast Asia. One of half a dozen demining outfits operating in Cambodia, MAG employs Belgian shepherds and a variety of mechanical devices.

“I don’t think they can add a whole lot to what dogs can do. But if they can speed up the pace of demining, great. Let’s wait and see,” Crowther says. He adds that there is plenty of work to go around: It will take up to 15 more years to clear the country’s explosives.

McCarthy notes that there was skepticism about using dogs to detect landmines decades ago, “and look at them now.”

“As we accumulate more data, the more we break down the skepticism.” McCarthy says APOPO, the only organization using rats, doesn’t have the total solution for mine-clearing but just “one fantastic tool in the tool box.” 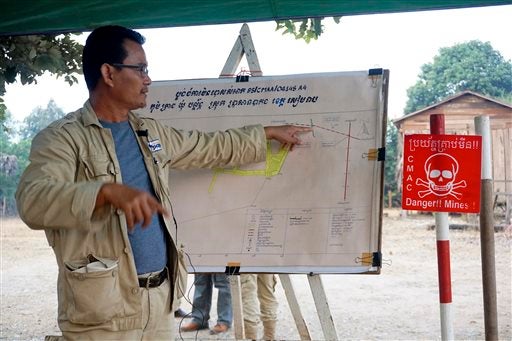 In this Feb. 19, 2016, photo, Theap Bunthourn, operations coordinator, describes the land mine threat around the village of Trach, Cambodia. More than 15 people have been killed or injured in mine blasts. (AP Photo/Denis Gray)

The group was founded in 1997 by Belgian Bart Weetjens, who bred rats, hamsters and other rodents as a boy and developed the idea of using rats to find mines while at university.

Even Mark Shukuru was skeptical when he joined APOPO in 2001 at the group’s headquarters in Tanzania. “At first I thought: ‘Rats finding mines? It’s impossible.’ But they proved they could do it,” he says, noting that in Mozambique they cleared more than 13,000 mines without a single injury, to humans or rats.

Shukuru shepherded the Tanzanian-born rats to Cambodia, one of the world’s most heavily landmined countries, with up to 6 million mines or pieces of unexploded ordnance still left in the ground from decades of war. The mines at Trach were laid in the 1980s by Khmer Rouge guerrillas fighting the Vietnamese army.

Countrywide, about 67,000 people have been killed or injured since 1979, and with more than 25,000 amputees Cambodia has highest ratio of mine amputees per capita in the world, according to de-mining organizations. A mine accident occurs every 2½ days on average. 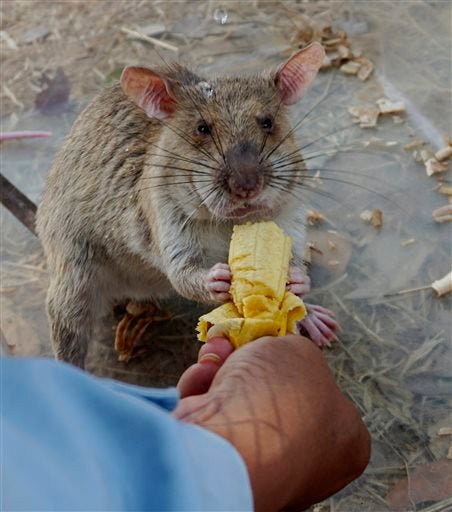 In this Feb. 19, 2016, photo, a landmine clearing rat gets a favorite reward – a banana – after a morning’s effort to sniff out mines still buried in Trach, Cambodia.  (AP Photo/Denis Gray)

Training the Cambodian rat contingent — eight males and six females — began at age 4 weeks by getting them accustomed to humans. This was followed by a rigorous, 9-month-long boot camp in Cambodia with APOPO, supported by the Cambodian Mine Action Center, one of a half-dozen demining outfits in the country.

The rats learned to associate a click with a food reward before being taught to respond to the scent of TNT. When they indicated TNT by scratching, a click was sounded and food followed. Eventually the click became unnecessary.

Before going into the field, the recruits are tested: One missed mine, and they don’t graduate to Hero Rats, registered as the trademark HeroRATs. 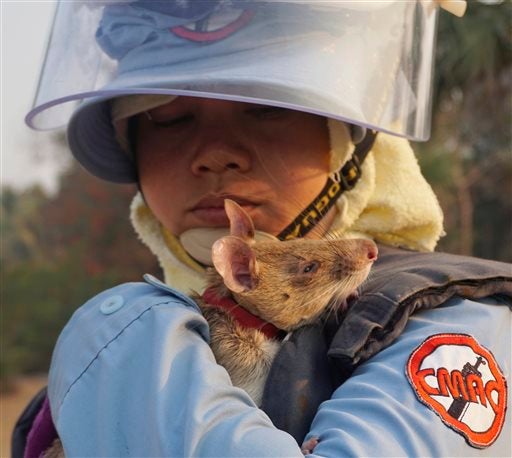 In this Feb. 19, 2016, photo, Cambodian team member So Malen plays with Cletus after he scampered across a field believed to be sown by mines in Trach, Cambodia. (AP Photo/Denis Gray)

Now, they are falling into an operational routine, usually working six days a week and being somewhat pampered when off-duty, sleeping indoors in roomy individual cages on wood shingles and kept healthy by regular exercise walking on a leash or on a running wheel. They are given multivitamins and weighed twice a week (a fat rat is a lethargic rat, one keeper says).

On weekends there’s a special feast of apples, potatoes, watermelon and carrots. But what really drives their mine-sniffing are bananas and peanuts.

After the morning session, Victoria, Cletus and the others rested in portable cages near the mine fields while handlers offered them bananas, which they grabbed and greedily devoured. Grateful villagers gathered round the cages.

Read Next
Indonesia plans to close all red-light districts by 2019
EDITORS' PICK
WHO says monkeypox is not yet a health emergency
Guarding Sara: Why next VP is getting own security team
House energy committee chair Arroyo bats for cheap electricity
A massive highway complex makes living in the South highly attractive
Metro Manila logged most number of new COVID-19 cases — OCTA Research
Beyond the Chocolate Hills: A farm-to-table, heritage culinary adventure of Bohol
MOST READ
Leon Barretto steps up for sisters, asks dad Dennis Padilla: ‘Please stop resorting to public shaming’
LOOK: Rita Daniela pregnant with first child
Bea Alonzo, under lie detector test, says she wants prenup agreement with future husband
Marjorie Barretto to speak up on Dennis Padilla, kids’ relationship ‘in time’
Don't miss out on the latest news and information.