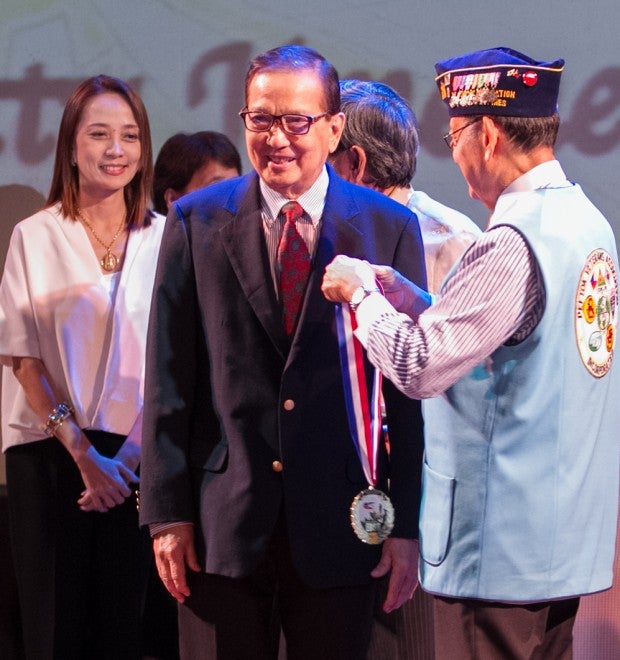 They were “pests” welcomed by a long-suffering people, their bites turning lethal to help topple a despotic regime.

Spearheaded by Eugenia Duran-Apostol, the late Letty Jimenez-Magsanoc and Jose G. Burgos Jr., the so-called “mosquito press” spread an epidemic of change that emboldened Filipinos to fight for their freedom at Edsa 30 years ago.

At a time when truth-telling was a crime punishable by death, the leading ladies of the Philippine Daily Inquirer and the publisher-editor of Pahayagang Malaya dared to go against the tide of conformity, and created a wave of reform that swept over a nation thirsting for liberation.

Philippine journalism’s icons, who stung at the excesses and abuses of the Marcos dictatorship, were honored on Monday night in ceremonies at RCBC Plaza in Makati City for their role in restoring the country’s democracy in 1986 through the Edsa People Power Revolution.

Apostol, Magsanoc and Burgos, along with 20 other freedom fighters and “good citizenship” awardees, were conferred recognized by the Spirit of Edsa Foundation (Soef) for their patriotism and genuine service which embodied the message of the bloodless uprising.

Magsanoc, the late editor in chief of the Philippine Daily Inquirer, was given a posthumous Soef Freedom Award for her “unrelenting fearless crusade for democracy, accountability and honesty.”

Soef described her as “a freedom fighter, wielding her pen against the Marcos dictatorship and any and all who would oppose and betray the Filipino people.”

It honored Magsanoc for “being the bedrock of journalism and a force for good in our society, an inimitable truth-teller to the nation.”

Alongside Magsanoc, former Inquirer publisher Apostol was recognized for her “courageous trailblazing acts under the most perilous circumstances and forging uncharted paths guided only by her strong morals to stand for issues that have meaning in the lives of Filipinos.”

According to Soef, “(Apostol) was one of the Filipino publishers who played an important role in the Filipinos’ quest for truth, justice, freedom and democracy. Her relentless efforts and dedication in publishing the Philippine Daily Inquirer became an opportunity for her concerted antidictatorship campaign.”

The foundation said Apostol countered government propaganda with in-depth coverage, features and editorials at the  Inquirer.

“Through her untiring efforts, the Philippine Daily Inquirer became the country’s leading newspaper and played a very important role in shaping public opinion that led to the end of a dictatorship and Corazon Aquino’s assumption to office as President,” Soef  said.

Soef also honored Burgos, recognized as the main symbol of the country’s mosquito press, a nationalist, a pillar of journalism and a freedom fighter.

The posthumous citation read: “In the wake of the growing moves of the government to suppress press freedom in 1973, Jose G. Burgos Jr. released what was to be known as the WE Forum that covered rallies and (made) exposés against the Marcos administration.”

It stated: “He published Pahayagang Malaya and dedicated his entire journalistic career to an unrelenting pursuit of truth, equality, justice and freedom. He continuously lived the spirit of Edsa in the upliftment of the lives of the marginalized sectors of society.”

In his inspirational message, President Ramos—among the key players of the Edsa Revolution—said: “It is really hard to speak on behalf of the awardees because those that should really be awarded are not here with us since they’ve passed away, offering their lives to our great Republic and our courageous people.”

He offered a silent prayer for the posthumous awardees and other “martyrs,” particularly those who “were tortured, abused, incarcerated and who otherwise suffered,” and who, according to Ramos, “deserve the award better.”

“We are all fortunate, those of us who are still here, 30 years after our struggle in Edsa. This is our common quality today dear friends: We are all survivors,” he added.

Ramos cited the Edsa Revolution as one of three important things in Philippine history, along with the revolution against Spain and the defense of Corregidor.

“That (Edsa Revolution) was just the beginning, not the end. You cannot do all that in just one click. It may take one, two or even three generations … It is our responsibility to work harder than we did at Edsa for a better future for all Filipinos.

“Kasama lahat. Walang maiiwan (We are all together. No one is left behind),” Ramos concluded.

The Soef Awards committee chair, Marianne Hontiveros, said the awardees “are the inspiration for all of us and for our future generations to … sustain the true meaning of the spirit of Edsa—that of genuine, selfless service for the people.”

“As we close in on another political crossroad with the national elections a few months away, may the defining principles characterized by our awardees guide us in our choice of our country’s leaders as we pray and work for a better tomorrow and fulfill the promise of Edsa,” she concluded.