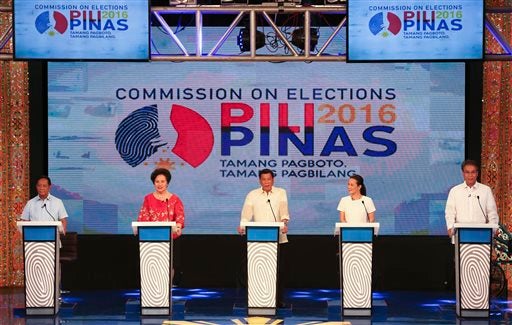 In this Feb. 21, 2016, file image provided by the Philippine Daily Inquirer, from left: Vice President Jejomar Binay; Sen. Miriam Defensor-Santiago; Mayor Rodrigo Duterte of southern Davao city; Sen. Grace Poe; and former Interior Secretary Mar Roxas; listen to a question at a presidential candidates debate held in southern Cagayan de Oro city, southern Philippines. Poe, a political newcomer, leads opinion polls ahead of the May 9 elections, with Binay, close behind. They are followed by Roxas and Duterte in a tight four-way race – a rarity in the Philippines. Lyn Rillon/Philippine Daily Inquirer via AP

Four are within striking distance. Sen. Grace Poe, a political newcomer, leads opinion polls ahead of the May 9 elections, with Vice President Jejomar Binay, close behind. They are followed by former Interior Secretary Mar Roxas and Rodrigo Duterte, mayor of the southern city of Davao.

Poe, 47, has seen her popularity soar since she first ran for office three years ago. She is the adopted daughter of one of the country’s most famous movie couples. Her late father mostly played roles as a defender of the downtrodden in a country still plagued by widespread poverty and corruption.

But the Commission on Elections ruled in December that Poe was not a natural-born Filipino as required by the Constitution because she was abandoned as a baby by her unknown parents at a Roman Catholic church.

The U.S.-educated Poe, who renounced her Filipino citizenship for about five years to live with her own family in America, also lacked the required 10-year Philippine residency ahead of the vote, the commission said. That prompted Poe to bring her case to the Supreme Court, which could deliver its verdict soon — and have a huge impact on the presidential race.

Roxas and Duterte each got 20 percent each in the survey that polled 1,800 people nationwide and had a margin of error of plus or minus 2 percent.

“It’s a very tight race,” Tabunda said. “We don’t really know what the next survey will say.”

Should the court rule against Poe’s candidacy, it is unclear who would benefit. Poe has carried on, holding rallies across the country.

“The story of my life started in a church,” Poe told followers when she kicked off her campaign outside a downtown Manila church popular among the underclass. “So I decided to go in front of a church to launch the next chapter of my life.”

President Benigno Aquino III’s successor will need to grapple with poverty, corruption and Marxist and Muslim insurgencies in the south — persistent problems facing the country that three decades ago toppled the dictatorship of Ferdinand Marcos through a “people power” movement.

Aquino’s anti-graft campaign led to the detention of his predecessor on an elections fraud charge and three senators, and the economy has grown steadily. However, a tenth of the country’s 100 million people still seek better-paying jobs abroad. He ends his six-year term in June.

Aquino, who has had a falling out with Binay, has endorsed Roxas, a former investment banker who served as Aquino’s transport chief and later as interior secretary in charge of local governments and the national police.

Legal woes have also hounded Binay and Duterte, a tough-talking mayor who has caught national attention for threatening to take down criminals, drug lords and corrupt bureaucrats within half a year if elected president.

Elections officials have dismissed petitions to disqualify Duterte, 70, but those could still be challenged in court. His party put forward another candidate while they convinced him to run, and some questioned whether he could replace the party’s initial nominee.

Binay, 73, faced several months of investigation by a Senate committee over alleged corruption when he was still mayor of Makati city, Manila’s version of Wall Street. He has denied the allegations, which have weighed down his popularity.

Anti-graft officials have found “probable cause” against Binay over alleged corruption in the construction of a parking building when he was mayor. But a government prosecutor said Binay would not be charged before a special anti-graft court until his vice presidency ends because he has immunity while in office.

READ: Binay: A fish caught by its mouth

Unlike in the past, the closely-fought battle now has left many undecided, including Macario Puno, a 48-year-old father of seven who ekes out a living by peddling boiled duck eggs and chips in Manila’s streets.

Puno backed the winning candidates in the last three presidential polls, including Aquino in 2010, because he said the choices always narrowed down to just two main contenders.

“Now there are four major candidates,” Puno said. “And they’re all sweet-talkers.” TVJ

Binay-Roxas exchange, Duterte make most noise on Twitter during debate

Duterte’s ‘sovereign function’ and other sidelights