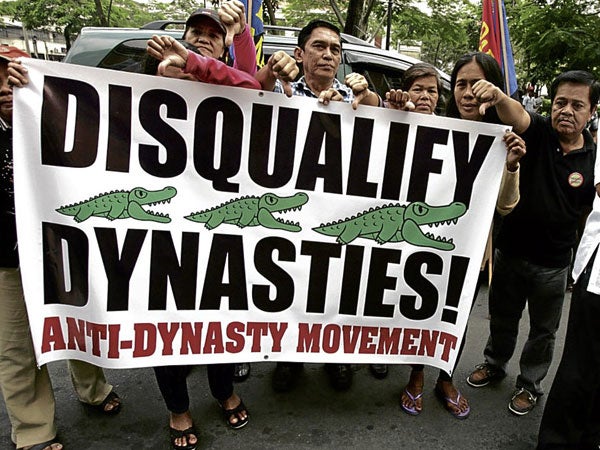 Filipinos are split on what to do with candidates from political families, a Pulse Asia survey showed.

The survey conducted from January 24-26 revealed a three-way split in public opinion on political dynasties.

Half of the respondents from the National Capital Region disagreed with the statement that candidates coming from political dynasties should not be voted for office.

While those who belong to Class ABC (about 42 percent) also believe that those candidates who have relatives and immediate family members in government should be given a chance to sit in office.

The issue of political dynasties became a hot-button issue during the first presidential debate conducted on Sunday in Cagayan de Oro City.

During the debate, United Nationalist Alliance (UNA) standard bearer Vice President Jejomar Binay was asked about his view on the issue, considering that his wife and three children have occupied various government posts.

He said that while political dynasties are barred by the Constitution, no law has defined its scope. Binay also said that qualified people should not be prevented from serving the people.

Presidential aspirant Miriam Defensor Santiago slammed Binay’s statements, saying that what the Constitution has provided regarding political dynasties should suffice.

“It’s a ba­sic prin­ci­ple of con­sti­tu­tional law that any­thing writ­ten in the Con­stitu­tion … should be lit­erally ap­plied if pos­si­ble. The Con­sti­tu­tion is al­ways and al­ways supreme,” the senator said.

Clean, credible polls in May

Meanwhile, the survey also showed that about half of the respondents are optimistic that the upcoming May elections will be clean and credible due to its automated process.

A total of 48 percent of the respondents said that clean and credible polls would happen in May due to the automated process, 36 percent were ambivalent with the claim while 15 percent disagreed.

Those from the NCR and those belonging to class E are the ones optimistic for clean polls in May, Pulse Asia said.

Despite this optimistic view, a sizable plurality (39 percent) expect cheating in May elections, with vote-buying being the mode of cheating likely to be employed.