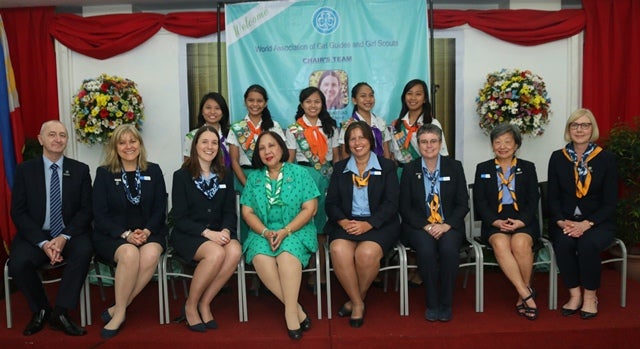 GSP welcomed the Chair’s Team of the World Association of Girl Guides and Girl Scouts (Wagggs), headed by Nicola Grinstead (seated third from left) in Manila on Feb. 5. CONTRIBUTED IMAGE

The Girl Scouts of the Philippines (GSP) welcomed the Chair’s Team of the World Association of Girl Guides and Girl Scouts (Wagggs), headed by Nicola Grinstead, who arrived in Manila on February 5.

Miss Grinstead is chair of Wagggs, the largest voluntary movement in the world dedicated to transforming the lives of girls and young women.

She started her Girl-guiding experience with Girl Guides UK as a Brownie in Bolton, Lancashire Border, and was a board member of Girlguiding UK just before her elections as World Board member in 2011.

As chair of Wagggs, she works on initiatives that help young women make the world a better place.

Through the global programs of Wagggs, girls from all over the world come together to learn new skills, share international experiences and for life-long friendships.

The Girl Scouts of the Philippines is among its 146 active member-organizations providing Filipino girls opportunities for learning, character formation and community service.

For this triennium, the Chair’s Team chose the Philippines for the first bi-annual meeting and GSP is honored to host this event. 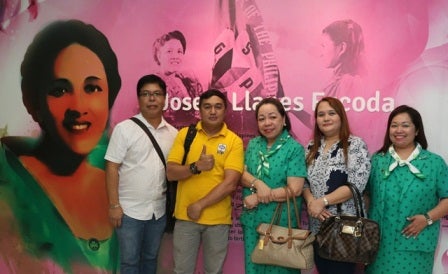 Recently, GSP promoted the Commission on Elections’ “No Bio, No Boto” campaign.

The GSP is the leading institution recognized and affirmed by the Philippine government to promote the vital role of the girl-children and girl-youth in nation building. To this end, the GSP envisions Filipino girls and young women who are progressive, dynamic, proactive, patriotic, and God-loving. Its goals are geared toward the provision of programs and activities that will help build character, develop the girl-youth, and prepare themselves for their responsibilities in the home, the nation, and the world community.

Girl Scouting in the Philippines started as early as 1918 through lone troops organized by American missionaries and navy families. The movement was formally founded by Josefa Llanes Escoda after she underwent Girl Guiding/Girl Scouting training abroad. On May 26, 1940, GSP was chartered under Commonwealth Act. No. 542 during the administration of President Manuel L. Quezon.

When World War II was declared, the operation of GSP was suspended. Its early women leaders and members, led by the Founder, were active in underground activities helping the prisoners. Immediately after the war, the organization was restructured. In 2009, this role was re-strengthened when the 14th Congress of the Philippines passed Republic Act 10073, which instituted the New Girl Scouts of the Philippines Charter.

GSP’s membership is distributed among 96 Girl Scout councils all over the country, which are administered by the 6 Regional Offices in Northern Luzon, Central Luzon, Southern Luzon, Visayas, Eastern Mindanao, and Western Mindanao. These girls are registered under troops composed of members whose ages range between 4 and 21.

The Girl Scouts of the Philippines welcomed the Chair’s Team of the World Association of Girl Guides and Girl Scouts (Wagggs), headed by Nicola Grinstead (seated fourth from left), who arrived in Manila on February 5. Here, the team is shown with GSP professional staff members. CONTRIBUTED IMAGE

The GSP Program is the whole environment in which Girl Scouting takes place, the vehicle by which the aims of non-formal education are realized. It is designed to meet the girls’ essential needs, harness their capabilities, maximize their potentials, and develop women leaders and women of character among Filipino girl-youth under 30.

In this program, the girls become productive and contributing members of the Philippine society and responsible citizens of the world community.

Through the years, the GSP Program has evolved in order to respond appropriately to the challenges of the time. It revolves around the Eight-Point Challenge with activities that develop knowledge, skills, and attitudes in the Arts, Economic Self-Sufficiency, Environment, Family Life, Filipino Heritage and Citizenship Preparedness, Spirituality and Well-Being, and World Community.

It has also institutionalized a number of impact and special projects specifically designed for girl-youth under 30. This includes the Chief Girl Scout Medal Scheme which encourages Girls to initiate and complete a one-year community project in their respective barangays in the areas of health, cultural heritage, livelihood, and ecology.

Another is the Pilar Hidalgo Lim Troop Achievement Award which is awarded to Girl Scout troops that have undertaken community development projects such as herbal gardens, piggery, tilapia raising, beautification, tree planting, and food production. 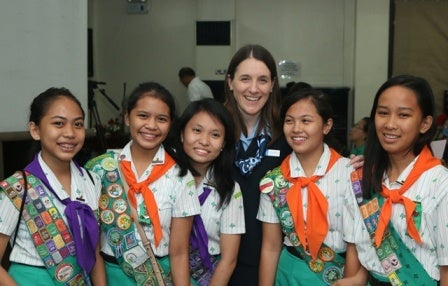 There is also the National Senior-Cadet Conference, a national gathering created, developed, and attended by Senior and Cadet Girl Scouts, where Girl participants discuss contemporary issues affecting them and address these issues with relevant activities and projects which they themselves could implement in their respective councils.

The ultimate target of the GSP is to build character by instilling in them values that would last a lifetime. Seventy-five years of doing so has unmistakably produced remarkable and extraordinary Filipino women whose involvement with the GSP began when they were under 30. Later on, they largely contributed to Philippine society and the international arena. They live the ideals of girl scouting and promote how girl scouting empowers and changes lives. 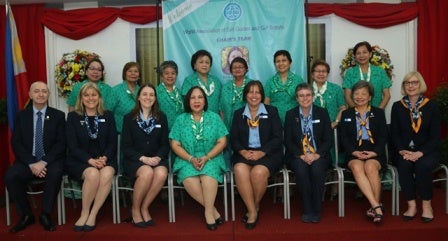 In the past triennium, the GSP aligned its programs with the Global Action Theme of the Wagggs, an educational program focusing on the Eight Millennium Development Goals. The GSP is vigilantly working with local and international women organizations to ensure that girl-child and girl-youth issues are raised and addressed.

Today, the GSP continues to support the call of the United Nations to place women and girls at the center of the global struggle in the achievement of the Sustainable Development Goals, emphasizing that only with the liberation of girls and women from poverty and injustice would the goals for peace, security, and sustainable development be achieved.