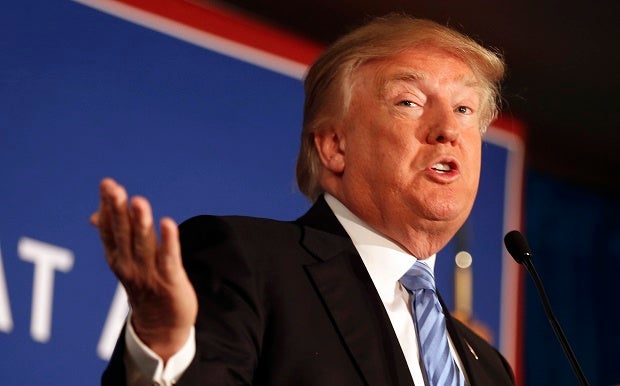 CHARLESTON, United States—Republican presidential frontrunner Donald Trump called Friday for a boycott of Apple until the computer giant complies with US government demands to unlock the iPhone of a suspect in the San Bernardino attacks.

“Apple ought to give the security for that phone, OK?” Trump told a campaign rally in Pawleys Island, South Carolina, one day before the state holds its hotly contested Republican primary.

“What I think you ought to do is boycott Apple until such time as they give that security number,” he said. “I just thought of it. Boycott Apple.”

The government sought a court order Friday to force Apple to help unlock the iPhone as part of the probe into last year’s San Bernardino attacks, escalating a legal showdown over encryption.

READ: Fight over gunman’s locked iPhone could have big impact

Apple had pledged this week to fight a magistrate’s order to assist in unlocking the phone used by one of the shooters.

“First of all, the phone’s not even owned by this young thug that killed all these people. The phone’s owned by the government,” Trump said.

Suspect Syed Farook, who was killed in a shootout with authorities after the attack that left 14 dead, worked for the county in California where the December rampage occurred.

READ: Profit or patriotism? What’s driving fight between US, Apple

Trump lashed out at Apple chief executive Tim Cook, saying he was “looking to do a big number, probably to show how liberal he is.”

The motion brought by the Justice Department sought to debunk Apple’s claim that cooperating with the FBI probe would undermine overall security for its devices, and laid out the legal case for technical assistance.