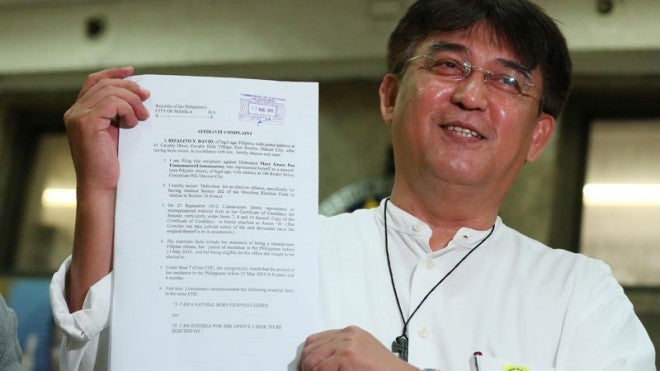 Presidential aspirant and Senator Grace Poe’s nemesis Rizalito David asked the Supreme Court to reverse its earlier ruling affirming the decision of the Commission on Elections (Comelec) declaring him a nuisance candidate.

The Comelec cancelled David’s certificate of candidacy (COC) because, among other things, he has no proof “of his financial capability to run a nationwide campaign.”

David, a broadcaster, then slammed the Comelec for “adding another requirement” to run for president.

“‘If you don’t have the money, you can’t run. That’s what they’re saying: ‘You’re only a broadcaster, you have no capacity to launch a national campaign,’” David said.

David has filed petitions to disqualify Poe as senator and as president, saying she is not a natural-born Filipino citizen.

In his latest motion filed with the Supreme Court, David insisted he can launch a nationwide campaign because he has the endorsement of several groups which have committed to assist him in his campaign.

“The decision just simply states that it is not persuaded by the submitted lists of organizations and individuals willing to support and campaign for the petitioner [David]. It does not indicate the substantive evidence on which the decision draws its reason. It simply says it is not persuaded,” David’s motion stated.

David said such ruling should be reversed for lack of basis. IDL