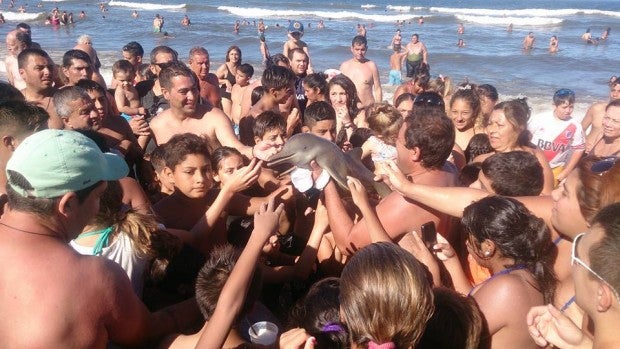 A baby dolphin being passed around by tourists on a beach in Sta. Teresita town in Buenos Aires, Argentina. Facebook photo by Hernan Coria

One of the two baby dolphins that tourists grabbed, petted and took photos with died on a beach in Argentina.

A baby Franciscana dolphin was killed last week at Santa Teresita City in Buenos Aires province after a throng of beachgoers passed it around with another dolphin for some picture-taking, UK’s The Independent reported.

One of the witnesses, Facebook user Hernan Coria, shared images showing two dolphins surrounded and being grabbed like trophies as the eager vacationers took photos with them.

It wasn’t mentioned what happened to the other dolphin but one photo showed one of the mammals was left on the sand to die.

Hoping to prevent similar incidents, the Argentina Wildlife Foundation has reminded the public of the vulnerability of the dolphins. 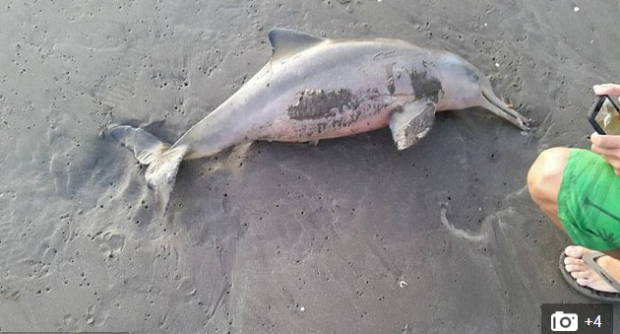 One of the dolphins was left on the sand to die. Screengrabbed from Daily Mail

“The Franciscan, like other species, cannot remain for much time out of the water. It has thick fatty skin which provides warmth, so the hot weather will cause rapid dehydration and death,” the foundation was quoted in the report.

“At least one of the animals [from the photos taken in Santa Teresita] died. The incident prompts us to inform the public about the urgent need to return these dolphins to the sea if one is found on the shore. It is vital to help rescue these animals, because every Franciscan counts.” TVJ