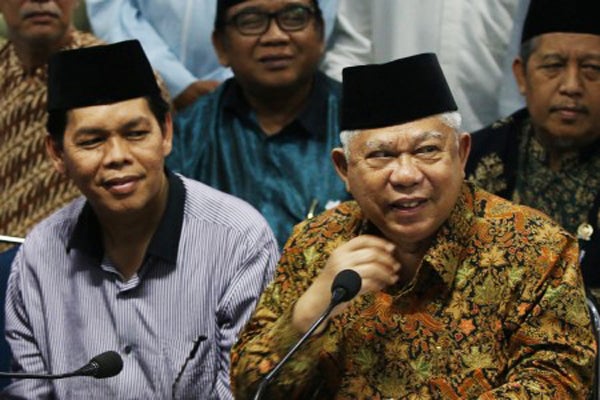 Indonesian Ulema Council (MUI) chairman Ma’ruf Amin (right) and representatives of other Muslim organizations declare at an event on Wednesday that they consider lesbian, gay, bisexual and transgender (LGBT)-related activities to be “haram.” Antara/Rivan Awal Lingga

The Indonesian Ulema Council (MUI) announced on Wednesday that it considered individuals identifying as lesbian, gay, bisexual and transgender (LGBT) to be “haram” (Arabic for forbidden), in the wake of recent controversy surrounding LGBT communities across the country.

The MUI, along with several other Islamic organizations, declared that the existence of LGBT communities was against the Constitution and against religious norms.

“The opinion is based on LGBT activities prohibited by Islam,” MUI chairman Ma’ruf Amin said at a press conference at the MUI office in Jakarta on Wednesday, as quoted by kompas.com.

LGBT activities were against the national ideology of Pancasila, the Constitution and the 1974 Marriage Law, he said.

Furthermore, the MUI issued a fatwa in 2014 stating that homosexuality, sodomy and sexual assault were haram

“LGBT activities could also cause dangerous and infectious diseases like HIV/AIDS,” he said.

LGBT issues came into the spotlight after Research and Technology and Higher Education Minister Muhammad Nasir made a controversial statement banning LGBT groups from university campuses. His statement was made in response to a student organization at the University of Indonesia named the Support Group and Resource Center on Sexuality Studies (SGRC) that offered counseling for LGBT students.