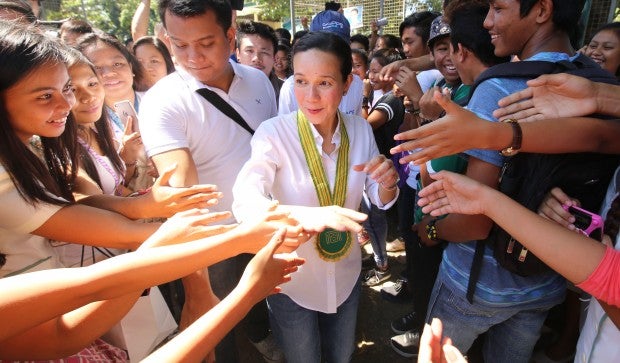 Sen. Grace Poe is expected to gain at least 10 percentage points in surveys once the Supreme Court erases all doubts about her citizenship and residency, and allows her to run for President, her camp said on Tuesday night.

Cebu Rep. Ace Durano, campaign manager of Poe’s Partido Galing at Puso, said the presidential aspirant would take a clear lead over her rivals after legal obstacles questioning her citizenship and residency issues were cleared.

“We are expecting plus 10 (increase) based on surveys we have made. She will get points from all her rivals,” Durano said on the sidelines of Poe’s rally in Iloilo province.

“Some voters might be with another candidate because of the legal uncertainty but their heart is really for Grace,” he added.

On Tuesday, the Supreme Court wrapped up oral arguments on petitions filed by Poe challenging two decisions of the Commission on Elections disqualifying her from running for President in the May elections.

The Supreme Court is expected to hand down its resolution on the case within the month.

A survey by the Social Weather Stations (Feb. 5 to 7) saw Poe and Davao City Mayor Rodrigo Duterte tied for second place with 24 percent. Vice President Jejomar Binay was No. 1 with 29 percent.

In a press conference in Roxas City yesterday, Poe said she remained confident of getting a positive ruling from the high court largely because of the “positive arguments” of Chief Justice Ma. Lourdes Sereno and Solicitor General Florin Hilbay supporting her case that she was a natural-born citizen qualified to run for President even if she was a foundling.

Durano also defended Poe against remarks by one of her rivals that her experience as a preschool teacher before she became a senator was hardly enough to prove her competence for leadership.

Durano said Vice President Binay’s remarks belittling the capacity of teachers was “disrespectful” of education professionals who have played a key role in nation building.

“The greatest style of leadership is to empower someone and that is what teachers do, to empower others. Teachers shape minds of people at a very young age and in that sense, are more powerful than a president,” Durano argued at the sidelines of a Poe-Escudero rally in Jaro City, Iloilo.

Durano was reacting to Binay’s swipe at Poe’s lack of experience in executive and leadership roles.