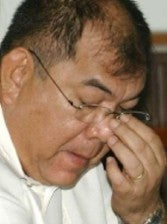 The Supreme Court has denied the petition for habeas corpus filed by retired Maj. Gen. Carlos F. Garcia, who was recently thrown into jail after his 2005 conviction by a military tribunal for violating the Articles of War was approved by President Benigno Aquino III last month.

The high court’s Third Division, chaired by Associate Justice Presbitero Velaso Jr., however, instructed respondents including Executive Secretary Paquito Ochoa, representing the Office of the President, and Defense Secretary Voltaire Gazmin, to file their comments but not a motion to dismiss, within 10 days from notice on Garcia’s petition for certiorari.

A petition for certiorari basically seeks to review the decision of a lower court, in this case the military tribunal that rendered the decision. On the other hand, a petition for habeas corpus seeks release from alleged unlawful detention.

“Habeas corpus does not lie where the petitioner has the remedy of appeal or certiorari because it will not be permitted to perform the function of a writ of error or appeal for the purpose of reviewing errors or irregularities in the proceedings of a court having jurisdiction over the person and the subject matter in the absence of special circumstances requiring immediate action,” the high court division ruled, citing a doctrine set in a 1994 case.

The court ruled that the writ of habeas corpus could not be availed of if an individual’s liberty is restrained through some legal processes.

As such, the writ cannot be used to directly assail a judgment rendered by a competent court or tribunal which, having duly acquired jurisdiction, was not deprived or ousted of its jurisdiction through some anomaly in the conduct of the proceedings, it added.

The high court found that since Garcia was convicted of the charges against him by a competent court, the remedies of appeal or certiorari were available to him. The fact that he has retired from military service does not divest the court of its jurisdiction. This is because the trial of his case was conducted prior to his retirement, the court said.

The high tribunal also declared that it would “not permit a situation wherein the petitioner will enjoy his freedom even after conviction if the writ is granted in advance of a determination of his case in court, absent any special circumstance that would warrant the same.”

Garcia sought the annulment of the confirmation of sentence issued by Aquino on Sept. 9 which found the former military comptroller violating both Articles of War.

The charges stemmed from Garcia’s alleged misdeclaration of his Statements of Assets, Liabilities and Net Worth (SALNs) for 2002 and 2003 and for possession of a US permanent resident status even though he was still active in the military service. Garcia ended his military career in November 2004.

The charges are distinct from the cased filed against Garcia before the Sandiganbayan.

Garcia is currently detained at the New Bilibid Prison in Muntinlupa City, where he is serving his two-year sentence.