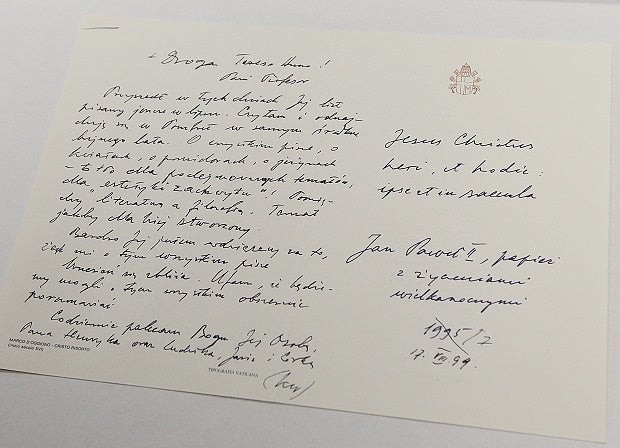 One of hundreds of letters that Polish Cardinal Karol Wojtyla, later Pope John Paul II sent to a Polish-American philosopher during the 32 years of joint work and friendship between the two, now kept at the National Library in Warsaw, Poland, on Tuesday, 16 Feb. 2016. The library bought hundreds of letters for a seven-digit amount in 2008 from the woman, the Polish-born American thinker Anna-Teresa Tymieniecka, and is planning to have them published in the coming years. AP Photo

WARSAW, Poland—Hundreds of letters that the Polish Cardinal who later became Pope John Paul II wrote to a woman philosopher document a “difficult” and “courageous” friendship of 32 years and suggest she could have been in love with the Catholic Church leader, the head of Poland’s National Library said Tuesday.

The library bought the letters via Sotheby’s for a “seven-digit” amount in 2008 from the woman, Polish-born American thinker Anna-Teresa Tymieniecka, and is planning to publish them in coming years.

The head of the library, Tomasz Makowski, told The Associated Press that the letters were written by Cardinal Karol Wojtyla who later became pope, from 1973 until shortly before his 2005 death. He said they hint that Tymieniecka, who died in 2014 aged 91, might have been in love with him, but he kept their relationship on a purely friendly and intellectual level.

Wojtyla, who lost his mother at the age of eight, and then his older brother and father by the age of 21, was open to people and cultivated friendships with dedication and care.

Makowski said he has read “every page” of the purchased file that also includes a “priceless” working copy of Wojtyla’s book that Tymieniecka edited for an English-language edition, with his hand-written remarks. They first met in 1973 when Tymieniecka proposed to edit his “Person and Act” philosophical work, and the long collaboration and exchange of views grew into a friendship. It temporarily grew sour over the editing when she rushed the book, titled by her “The Acting Person,” to publishers after Wojtyla was elected pope in 1978, but was later rekindled.

“When I read the letters I thought it was a difficult friendship, for many reasons, and a very courageous one because John Paul II was one of the very first high church officials who were not afraid to cooperate with women,” Makowski said, noting they both had very strong characters.

In every letter John Paul assured Tymieniecka he was praying for her and was thinking about her family and her problems, and also asked about her husband and her three children.

“These are letters of a true, concerned friend,” Makowski said. “But he wrote such letters to many other people, too.”

“The question is: was Tymieniecka in love with Wojtyla? I don’t know, but it is very probable,” he said.

“She was a philosopher. Let us not reduce her only to the level of a person in love,” he said. “She could have also been simply fascinated by John Paul II’s mind.”

The AP saw two handwritten letters—one referring to the time Cardinal Wojtyla and his secretary, Father Stanislaw Dziwisz, spent with her family in the summer of 1976 at the family’s vacation cottage in Pomfret, Vermont, the other one about philosophy.

Makowski says the library doesn’t have Tymieniecka’s letters to Wojtyla.

In 2014, the year when John Paul II was announced a saint, Dziwisz said that letters in his possession had been burned, in line with the late pontiff’s last will.