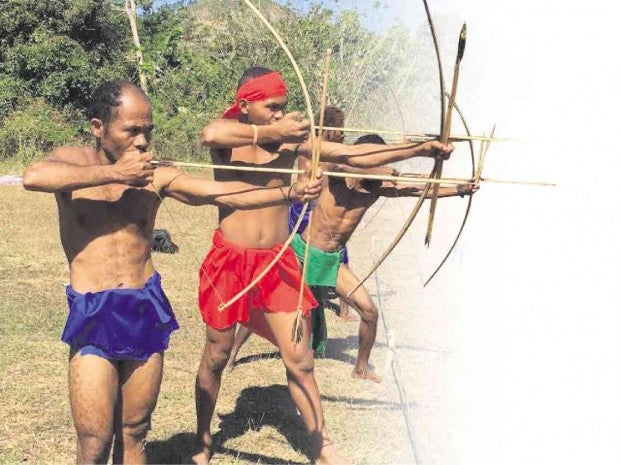 SUBIC BAY FREEPORT—They climbed trees, beat the bushes and bent their bows to shoot arrows. But they were not targeting wild boars.

For three hours on Saturday, 44 young and adult tribesmen from four Aeta communities in Zambales province gathered at the Pastolan Aeta Village here to demonstrate their hunting skills, all in the spirit of sportsmanship.

The indigenous athletes competed in tribal games that included archery, javelin throw and blowpipe as an expression of their desire to preserve their cultural heritage and to protect biodiversity.

The POC pooled resources together with the National Collegiate Athletic Association and University of Perpetual Help System Dalta to organize the tournament, Tamayo said.

“We want to make sure that our IP (indigenous people) [communities] will learn how to preserve their cultural heritage through a tournament like this,” he said.

He said young indigenous peoples are on the brink of losing their traditional survival skills, like hunting in the forest, due to “modern” influences.

“We don’t want to see tribesmen’s children being uncomfortable wearing their ‘bahag’ (G-string) or [to be] oblivious to their jungle survival skills,” he said.

The indigenous Olympics were held in an open field surrounded by dense forest to remind the tribesmen of the value of biodiversity.

“Our IPs are known protectors of our natural environment so we’re rekindling that aspect of their cultural heritage,” Tamayo said.

Alejandro Liwanag, 15, of Pastolan Aeta Village, was among the youngest participants in the tribal games. With his diminutive build, he surprised spectators with his ability to pull the string of a bow his size and then snap the arrow into the target.

Liwanag only smiled when asked how he learned the skill.

Wilson Pelayo, 21, an Aeta from Sitio Libas in Barangay Old Cabalan in Olongapo City, said he was delighted to join other athletes from different tribes in Zambales.

“This kind of competition allows our tribes to be recognized for our tradition and culture,” he said.

He said he has been taught by his parents and other elders in their tribe to carry on their tradition of hunting and gathering food and protecting the forest.

“We’re working together to make sure that we will never lose our cultural identity,” he said.

Tamayo said the tribal games would also help the POC scout for athletes who would be trained and sent to the World Indigenous Games.