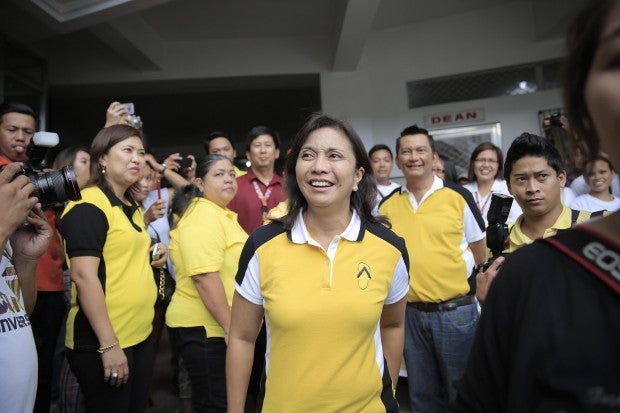 BicoLeni Campaign – Cong.Leni Robredo interviewed by the local and national media in Albay province during the launching of “BicoLeni Express”, a campaign to help and support Cong.Robredo for the non-stop progress in the region held in Bicol College Daraga Albay on January 14, 2015, Thursday.
PHOTO BY MARK ALVIC ESPLANA / INQUIRER SOUTHERN LUZON.

LIBERAL Party’s vice presidential candidate and Camarines Sur Representative Leni Robredo expressed sadness that some people believe that the Philippines was at its best during the martial law period.

Robredo said that this martial myth could be easily shattered by facts and figures provided for in the country’s history books.

(It’s sad when I see posts on social media saying that the martial law years were the best years in our country’s history. It’s not difficult to see that claim is false because there are facts and figures.)

She said that many lives were lost and many rights were violated during the Marcos regime.

(It’s sad because what we have gone through wasn’t easy. When we trace our history, many lives were lost and many rights were violated—all in the name of politics.)

Being a personal issue for her, the first-termer congresswoman said that she has attended various street demonstrations following the death of Sen. Benigno Aquino Jr. while she was in college.

She also knew people whose family members were slain during the Marcos dictatorship.

(I have friends whose family members were victims of the regime. It’s sad that many people offered their lives for the freedom that we enjoy today.)

Thirty years after the People Power Revolution, Robredo emphasized the importance of having a democracy where a free press thrives and a government which can freely engage to its constituents exists.

In the end, she said that while she does not bear ill will against those who think that martial law has been the country’s best period, she hopes that they will be enlightened.

(It’s not that we are judging them. But I think the Filipino people should know what we have been through.)

One of Robredo’s rivals is the late dictator’s namesake and son, Senator Ferdinand “Bongbong” Marcos Jr.