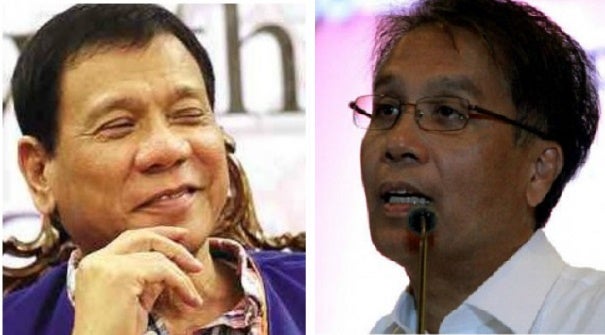 DAVAO City, Philippines—Mayor Rodrigo Duterte on Saturday accused rival presidential candidate Mar Roxas of being a protector of a mining company in Agusan del Norte since Roxas has been using the company’s plane in his campaign.

“I thought because he (Roxas) is a billionaire he is not corrupt,” Duterte said in a statement released by his media team.

But he said that Roxas, the ruling Liberal Party standard-bearer, has been flying around the country using a private Citation owned by Francis Eric Gutierrez, owner of SR Metals Inc. (SRMI), a nickel mine operator that was penalized by the government in 2007 for “overmining.”

“That’s why they could not stop the mining operations [of SRMI] because Roxas has been using their airplane,” Duterte said.

“I have personally seen Roxas use that plane in Davao. If that is not corruption, then what do you call it?” he said.

According to press reports, SRMI and its sister companies, San R Mining and Galeo Equipment and Mining Corp.—which listed themselves as small-scale mining companies—were ordered to pay P7 million in penalties for over-extraction in 2007 after they shipped out 1.8 million metric tons of nickel from August 2006 to September 2007.

Under the law, small-scale nickel mines may only extract up to 50,000 metric tons of ore per year, or a 150,000-MT combined annual output for the three firms. The environment group Caraga Watch sued SRMI for over-extracting in 2006.

Gutierrez is a friend and business partner of Caloocan Rep. Edgar Erice, who is part owner of the mining company which he chaired at one time. Erice is also the political affairs chief of the Liberal Party and reportedly one of Roxas’ campaign financiers.

Reacting to Duterte’s attack, Erice on Saturday said that renting or chartering planes from businessmen was not corruption.

“All presidentiables are using planes owned by businessmen who are also engaged in mining, power supply, oil, water distribution,” he said in a text message.

Contrary to Duterte’s claim, Erice said his mining company was “in the pink of health” and has no legal, moral and environmental violations.

“Our mining business started during the Arroyo administration and is operating with all the permits. In fact, we are a presidential awardee for environment this year and we are a mining company with ISO 14000 certification. I can give a copy of all of this to Mayor Duterte anytime, anywhere he wants it,” he said. Germelina Lacorte, Inquirer Mindanao, and Gil Cabacungan