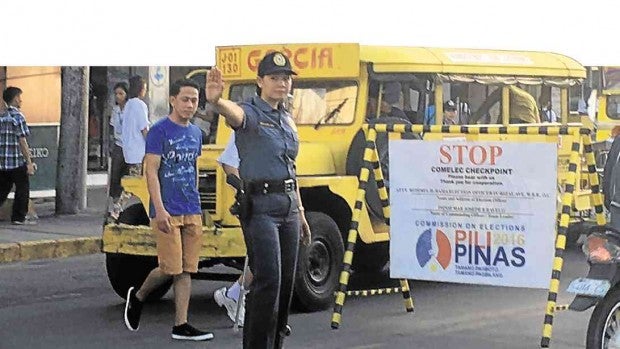 MOTORISTS in Olongapo City were greeted by the rare sight of an all-woman police team manning checkpoints as the official campaign period for national elections started on Feb. 9. The presence of policewomen at checkpoints, according to a member of the team, could “tone down the uptight mood.” ALLAN MACATUNO/INQUIRER CENTRAL LUZON

OLONGAPO CITY—Motorists were greeted by the rare sight of a team of policewomen inspecting vehicles at checkpoints here, following the start of the national campaign for the May 9 elections on Tuesday.

“This is the first time that a team of female cops was assigned to man some of the checkpoints in the city,” said Insp. Vivianne Reyes, who leads the team.

“We are expecting motorists to be a bit surprised,” she said.

Reyes, deputy chief for administration of police station 4 in the city, said checkpoints are usually a stressful sight for motorists.

“We were deployed to show the public that policewomen are capable of doing what our male counterparts usually do,” she said.

“Having a team of policewomen manning checkpoints will help tone down the uptight mood,” she said.

Before deploying her team to the streets at 4 p.m. on Tuesday, Reyes reminded the policewomen to prepare for all kinds of reactions from motorists.

“Some may be startled and others may ignore us but we have to let them know that we’re here to implement the law,” she told her team members.

Reyes also gave a rundown of what policewomen must do and avoid while manning the checkpoints.

“Be clear with your hand gestures. As much as possible, we don’t want to create traffic congestion,” she told them.

Before assuming her post at the checkpoint, PO1 Mary Ann Adolfo, a team member, said she felt “a little nervous” because “since we’re all women, some motorists might not take us seriously.”

“But we are here to do our duty and we will show them that we’re no different from our male counterparts,” she said.

PO1 Edlyne Eding, another team member, said, “I’ve been assigned to checkpoints in the past but the only difference now is that we’re all female.”

Reyes said most motorists the women law enforcers flagged down on their first day at the checkpoint are motorcycle riders who are not wearing helmets.

“Thankfully, our city is generally peaceful during the election period so we don’t have to worry so much about election-related crimes. But we’re prepared for any eventuality,” Reyes said. Allan Macatuno, Inquirer Central Luzon