Who would Grace Poe vote for if she is disqualified? | Inquirer News
Close
menu
search

Who would Grace Poe vote for if she is disqualified? 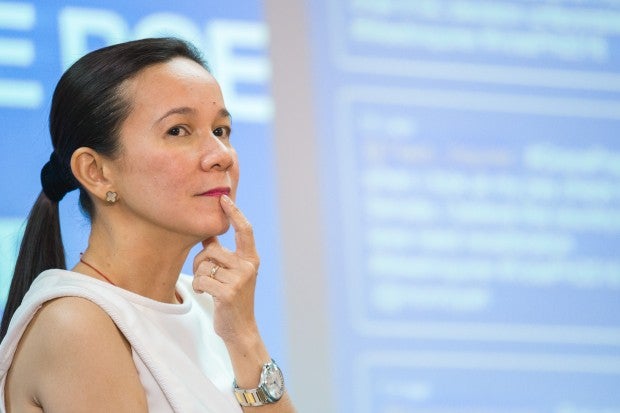 BATAC, Ilocos Norte — Senator Grace Poe expressed optimism on Thursday that a “successful outcome” in her candidacy was “not beyond reach.”

Poe made the remark when a student of the Mariano Marcos State University here asked a hypothetical question as to who she would vote for president in case she is disqualified from the presidential race.

“For your first hypothetical question and I’d lie to stress, very hypothetical because I’d like to remain optimistic and I feel that it’s not beyond reach that we will actually have a successful outcome in this candidacy,” she said.

Poe’s optimism was further bolstered by Supreme Court Associate Justice Francis Jardeleza’s opinion during the oral arguments last week that the Commission on Elections (Comelec) might have “crossed the line” when it cancelled the senator’s certificate of candidacy for president because of her citizenship and residency.

The senator said she was “very grateful” that some members of the high tribunal were beginning to see what they had long been saying that the Comelec turned a blind eye on the evidence that they had submitted to support her case.

Jardeleza was the third justice to back Poe’s claim that a foundling like her should be considered a natural-born Filipino and therefore, qualified to run for president.

The Supreme Court is still deliberating on two petitions: one seeks to reverse the Senate Electoral Tribunal’s decision against a quo warranto petition that seeks to unseat Poe as senator because of citizenship, and the senator’s own petition, seeking to reverse the Comelec’s disqualification ruling against her.