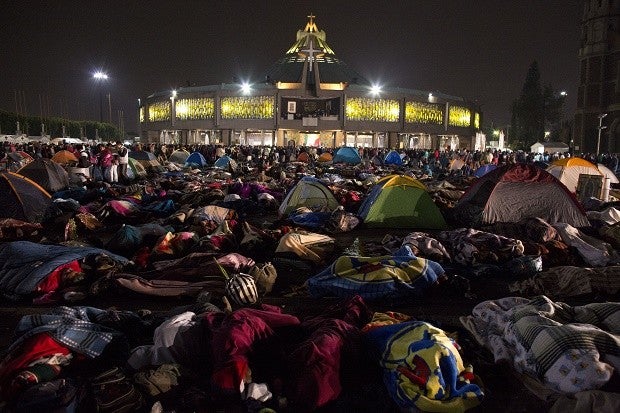 MEXICO CITY — A weathered pastel image of the Virgin of Guadalupe hangs from German Herrera Hernandez’s dashboard, watching over his passengers from her perch next to his cigarettes, gum and the handful of coins he uses to make change.

“We believe in her,” said Herrera, a 55-year-old who has been driving a cab in Mexico City for about a decade. “She protects us, wherever we go.”

When Pope Francis visits this week he’ll make an emotional stop at the Basilica of the Virgin of Guadalupe — patron saint of Mexico and “empress of the Americas” — where millions of pilgrims flock each year to pray before the shroud that bears her image.

But she’s also an ever-present part of life for millions of people like Herrera, not just at the basilica. Across the country, in private homes and public marketplaces, she gazes down beneficently from the walls of taco stands and police stations, from hair salon mirrors and even outside no-tell motels.

In poor barrios and posh shopping districts, perhaps nothing unites Mexicans more than their reverence for the Virgin. Grieving families light candles beneath her likeness in shrines to dead relatives, while young hipsters shell out big bucks for shirtsleeve tattoos of the Virgin.

“There’s the old refrain in Mexico that Mexicans are 90 percent Catholic and 100 percent Guadalupan,” said Andrew Chesnut, chair in Catholic studies at Virginia Commonwealth University. “If there’s one main constituent element of Mexican-ness, it’s Guadalupe, because she obviously transcends the religious realm. … So she sells products, she’s tattoos, (even with) people who aren’t necessarily her devotees.”

According to tradition, the dark-skinned virgin appeared before the Indian peasant Juan Diego in 1531 at Tepeyac, a hillside near Mexico City where Aztecs worshipped a mother-goddess, and her image was miraculously imprinted on his cloak.

The image helped priests inculcate Catholicism among indigenous Mexicans during Spanish colonial rule, and the church later made her patron of all the Americas. Juan Diego was canonized as the hemisphere’s first Indian saint in 2002 during the papacy of John Paul II.

Juan Diego’s cloak is on display today behind glass at the basilica, the most visited Marian shrine on the planet, where signs admonish against flash photography and long lines of worshippers are carried past along a self-moving walkway.

Chesnut called Francis “a very strongly Marian pontiff” and said his visit to the basilica will be one of the defining moments of his trip to Mexico, which has more Catholics than any other Spanish-speaking country.

Each year on Dec. 12, millions of people visit the basilica in northern Mexico City, many of them crawling or bearing statues of Guadalupe on their backs, to beseech all manner of favors: to be healed of an illness, freed from an addiction, for the welfare of loved ones.

The rest of the year, many Mexicans make the sign of the cross when they pass Guadalupe shrines found in just about every nook and cranny of the country. Custodians make sure the shrines are always well-kept with offerings of fresh flowers or candles.

READ: Pope Francis to plead for justice in Mexico visit—archbishop

At the Martinez de la Torre market in central Mexico City, a portrait of Guadalupe framed by neon tubes in the red, white and green of the Mexican flag graces a wall overlooking a meat counter.

“Why have a Virgin? Because our faith in her is very great, very important,” said butcher Erlinda Olivares Zuniga, who choked up when asked about Guadalupe ahead of Francis’ visit. “We are God’s chosen, because the Virgin appeared here.”

READ: Immigration at center of Pope’s visit to Mexico-US border