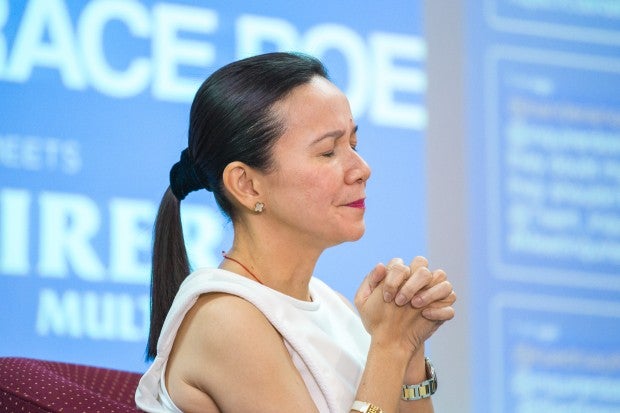 Senate President Franklin Drilon on Wednesday said the Supreme Court was taking so long to resolve the disqualification case against Sen. Grace Poe that it is posing a threat to the integrity of the 2016 elections.

“The issue cannot be left hanging. The case is posing serious threats to fair and credible elections in May and only the Supreme Court’s prompt action can eliminate that threat by resolving the case at the soonest,” he said.

Drilon said the high court appeared to lack a sense of urgency, noting that the tribunal has been holding only one session of oral arguments on the case per week.

“I’m not dictating on the court, but it is very frustrating because we know for certain that the court could hasten the process by conducting marathon hearings but it has chosen not do so,” he said.

The Supreme Court has so far held four oral arguments on the disqualification case against Poe, who brought a certiorari case against the Commission on Elections ruling disqualifying her from running for president on the grounds that she is not a natural-born Filipino and has not met the 10-year residency requirement.

The senator said the case should be given “extraordinary attention, so that it can be decided earlier in order to protect the integrity and credibility of the May 2016 polls.”

“This is not an ordinary case. It will have a vast impact on our future,” he told the Kapihan sa Manila Bay forum.

Drilon also said it was  “arrogance” for the Supreme Court to say that it knows what it is doing, referring to the tribunal’s earlier response when he made a similar plea.

“As I’ve said, the election is a basic tenet of democracy and any threat to it should be immediately resolved,” he said.

But Poe’s camp is not unduly perturbed by the delay. “On our side though, we will respect the SC, its decisions and the timelines they will prescribe,” said Poe’s spokesperson Rex Gatchalian while claiming that the candidate was also for the early resolution of the case.

Meanwhile, a lawyer for one of the petitioners against Poe Wednesday said Associate Justice Francis Jardeleza’s radical interpretation of the Constitution in favor of foundlings’ rights was tantamount to rewriting the fundamental law.

Lawyer Manuelito Luna, counsel for former senator Kit Tatad, said Jardeleza’s theory that the Constitution’s silence on foundlings should not be taken conclusively as an exclusion of abandoned infants from recognition as natural-born citizens was not supported by the 1935 Constitution, which covers Poe.

He also decried the magistrate’s view that the Comelec may have violated Poe’s due process and equal protection rights in disqualifying her even without making factual findings.

“With due respect, his views have very little legal support,” Luna told the Inquirer in a phone interview.

“Second, he is proposing a rewriting of the Constitution through a radical and unconstitutional interpretation, ignoring the text in the process,” said the lawyer.

Luna also said Jardeleza’s citation of writings by United States law practitioners during Tuesday’s oral arguments “are not binding on the Supreme Court.”

The lawyer said Poe may not cite a due process violation against the Comelec, having “lied” about her citizenship and residency in her certificate of candidacy.

“A noncitizen such as Poe… should be the last person to cry a violation of the due process clause and the equal protection clause,” he said.