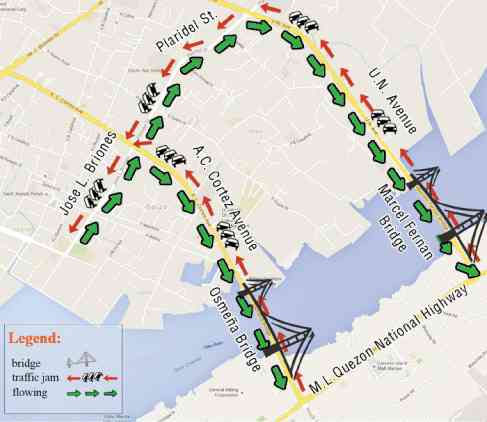 CEBU CITY—To avoid the horrendous traffic as the old Mactan-Mandaue Bridge, which connects Mactan Island to mainland Cebu, and roads undergo simultaneous rehabilitation and repair, commuters have been advised to take the ferry boats instead.

Engr. Ador Canlas, director of the Department of Public Works and Highways (DPWH) in Central Visayas, said he hoped that the alternative sea travel could ease the traffic on both the Marcelo Fernan and Mandaue-Mactan bridges.

Starting Wednesday, Metro Ferry Inc. deployed all its eight vessels to address the transport demand, said its owner, Augusto Go. Each boat can make 22 trips daily from the company’s terminal in Muelle Osmeña in Lapu-Lapu City to Pier 3 in Cebu City.

Go said ferry operations might start earlier than the usual 6 a.m. and end later than 11 p.m.

Arthur Aranda, skipper of the one of the vessels, said the number of passengers went up by 50 percent on Tuesday after commuters complained of horrible traffic at the Mandaue-Mactan Bridge after one lane was closed to start the repair. This took vehicles more than an hour to cross the bridge instead of the usual 10 minutes.

Later, the DWPH later opened the other lane, but it did not allow the full flow of traffic because of the concreting project on D.M. Cortes Street in Mandaue City. D.M. Cortes receives traffic from A.C. Cortes Avenue that leads to the old bridge.

Vehicular flow improved on Wednesday, according to Glenn Antigua, head of the Traffic Enforcement Agency of Mandaue (TEAM). During the rush hours between 7 a.m. and 8 a.m., traffic was already light to moderate, while vehicles were already on the road as early as 5 a.m.

But Antigua said he expected traffic to be heavy again next week when the DPWH would close one lane of the bridge.

Canlas said the 864-meter Mandaue-Mactan Bridge, had not undergone major repair since it was opened in 1972. Its dilapidated deck slabs must be replaced to ensure its structural integrity, he said.

Representatives of the Japan International Cooperation Agency (Jica) had earlier inspected the bridge and recommended its repair. 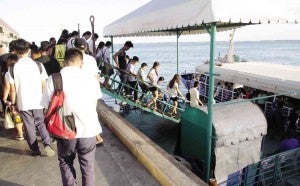 Workers of Jegma Construction, which is in-charge of the rehabilitation project, were improving the bridge’s sidewalks while waiting for the installation of steel braces and cover to protect the water pipes under the bridge. The pipes, owned by the Metro Cebu Water District, supply 70 percent of the water needs of Lapu-Lapu and nearby Cordova town.

On Tuesday, the number of Metro Ferry passengers swelled to 3,000, prompting management to deploy all eight vessels the next day. The company usually fields only three to four vessels to transport about 2,000 passengers.

Each of the smaller vessels can accommodate 152 people, while the biggest, the MV Princesa, can hold 270.

Fare is P14 for students and P12 for senior citizens. Passengers also pay a total of P3 in terminal fees.

Canlas asked other shipping companies to assign ferry boats and barges to cross the Mactan Channel from Mandaue to Lapu-Lapu “as soon as possible.”

His office is coordinating with the Cebu Ports Authority (CPA) to hasten processing of requirements for franchise applications. The agency had already agreed to waive the payment of berthing fees for new ferry operators.

Lapu-Lapu Mayor Paz Radaza has also talked with resort owners to allow the use of a portion of their coastline for docking.

According to Canlas, Julie Najar, president of the Hotels, Resorts Restaurants Association of Cebu (HRRAC)  and representatives from Crimson Hotel in Lapu-Lapu promised to relay the request to their superiors.