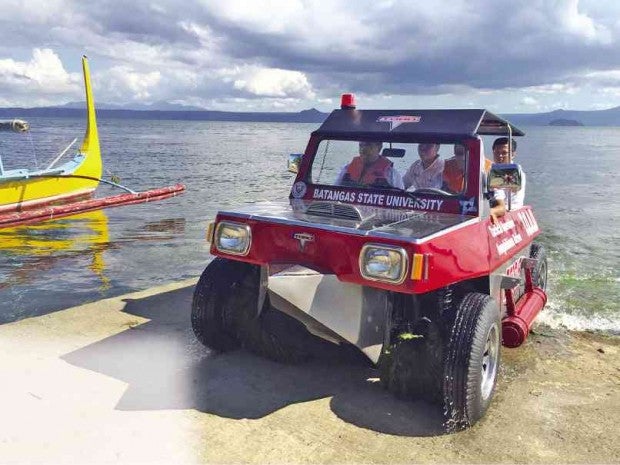 IT LOOKS like a typical jeepney, but hopes are high that this vehicle will be the country’s future in mobility and transport as a rescue and emergency response.

Introducing TOAD, or Tactical Operative Amphibious Drive, an amphibious vehicle that is truly Filipino in character which Batangas State University (BatStateU) unveiled recently and, according to its developers, the first of its kind to be funded by the Philippine government.

It is powered by two four-stroke gasoline-fed engines: a 22-horsepower engine for land navigation and a 15-hp unit for water navigation, according to Dr. Tirso Ronquillo, BatStateU president and project leader.

On ground, TOAD has an average speed of 60 kilometers per hour. In water, it runs up to 60 knots and uses a mechanically adjustable outrigger to ensure stability.

“Anyone who can drive an owner-type jeep can drive [TOAD],” Ronquillo says. It is equipped with an onboard global positioning system (GPS) that allows its user to electronically track its location.

The vehicle, whose body is made of stainless steel and aluminum, is designed primarily as a low-cost rescue transport for local governments, especially during floods. It is cheaper than other amphibious vehicles, which cost as much as P3 million, Ronquillo says.

The TOAD project was cofunded by the university with P900,000 and the Department of Science and Technology (DOST) with P500,000. The vehicle was developed from August 2014 to December 2015.

“We are lucky to have this [vehicle, but] a challenge now is its mass production,” says Alexander Madrigal, DOST director in Calabarzon (Cavite, Laguna, Batangas, Rizal and Quezon).

Madrigal says the agency is looking at the project’s second phase, which could feature the use of a hybrid engine and a bigger seating capacity.

A six-seat prototype was launched last week through a 15-minute demonstration drive by the Taal Lake in Talisay town in Batangas province.

It will be displayed at the Philippine Council for Agriculture and Natural Resources Research and Development office in Laguna province on March 6, in time for a visit by President Aquino.