This was among the four things Vice President Jejomar Binay Tuesday pledged he would do in the first year of a Binay presidency.

The others are free uniforms, books and school items for 20 million public school students; expansion of the conditional cash transfer (CCT) program to include senior citizens ages 60 to 64 and free medicine for the poor.

“If you give me the chance (to be President), all the things I say will come true,” Binay said at his and Sen. Gregorio Honasan’s proclamation rally at Welfareville in Mandaluyong City.

The standard-bearer of the United Nationalist Alliance (UNA) stirred up the crowd by saying he “could see, hear and feel [their] thirst and desire for real change.”

Binay reminded his audience that the Aquino administration had pledged to end poverty in the country. But almost six years after, he said, the number of poor people had grown.

Where are the jobs?

“And amid progress that benefited only some people through the so-called tuwid na daan (straight path), there are millions who still have no jobs, are poor, lack education, lack money to buy medicine and whose stomachs continue to grumble,” he said.

With the May elections nearing, he said, people were hoping for and dreaming of a leadership that was not uncaring, incompetent and bumbling—words he used to describe the Aquino administration last year when he resigned from the Cabinet.

“In the coming elections, we are given the chance to correct the wrong,” he said.

People now have the chance to choose its next leader who has experience, capable of leading the nation and who truly cares for the poor, according to the Vice President.

Binay said this was his dream for Makati City residents when he became its mayor and that he had proven his detractors wrong when he was able to achieve it.

“And tonight, I will reiterate what I always tell our people in the provinces: What we did in Makati, we would duplicate in the entire country,” he said.

It was at this point that Binay vowed the four things he would do in his first year in Malacañang, saying these were aimed at providing the people much-needed relief after six years under President Aquino.

“If I become the President, I will make sure the almost 20 million public school students will receive free books, uniforms and school items. And for this program, we will allocate P65 billion in our national budget,” he said.

Binay said his administration would team up with local governments and the private sector to ensure that the poor would be able to afford medical care.

He also said he would expand the CCT, a program of the Aquino and Arroyo administrations that provides cash to poor families in exchange for making sure their children go to school and pregnant women visit clinics.

Under the CCT program of a Binay administration, senior citizens ages 60 to 64 years old and other people would be included, he said.

“We will clean up the program to ensure that it will be free from politics and that the funds will not be put to waste. And we will ensure the benefits will be given on time,” he said.

In addition, Binay said, “[I]f I am the President, we will remove the income tax from people earning a monthly salary of P30,000 and less.”

To those who say the government would end up losing money from these pledges, the Vice President pointed out that the government was losing billions of pesos from smuggling, improper collection of revenues and taxes from the rich, and improper spending of government agencies. 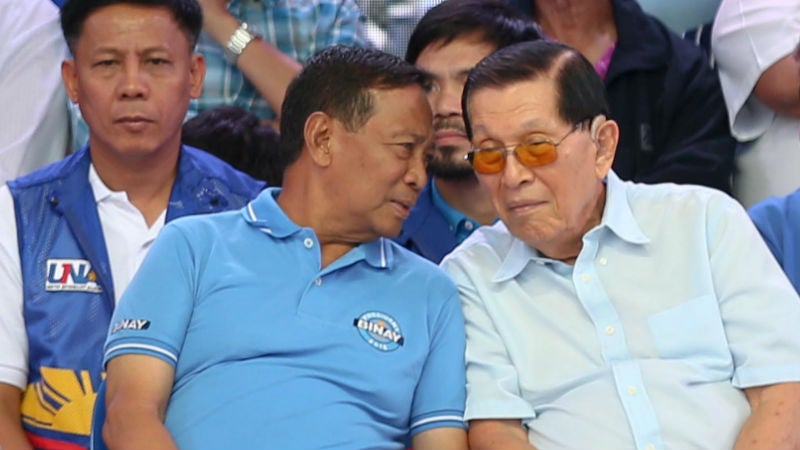 “This is what I will do and more in the first year of my administration,” Binay said.

Should the naysayers end up in power, true change will not happen and people’s lives will not improve, he said.

But this will be a different case if he wins the presidency, Binay said. “Your desire for jobs, good service and a caring government, these will all come true under a Binay administration.”

Mandaluyong City Benhur Abalos, a member of UNA, said his city was among the Vice President’s four choices to launch his presidential bid.

The top concerns of some of those in the crowd that they wanted Binay to address should he win the presidency were improving the educational system and protecting senior citizens’ rights.

Charisse Mateo, a mother of three, said she was supporting Binay in the coming elections because she believed Binay was a “responsible leader who would put an end to contractualization.”

He thanked Mandaluyong and its mayor, Abalos, because he said it was in this city where his “boxing career started.”

Pacquiao said he grew up poor and knew how it was to be poor.

He said Binay was also raised poor like him, drawing cheers from the crowd. “I’m excited for our President … . He is destined to be the next President,” Pacquiao said.

Without naming President Aquino, Senate Minority Leader Juan Ponce Enrile last night told the crowd: “If the President is incompetent, more Mamasapano would happen.” It was an apparent reference to Mr. Aquino whom Enrile had blamed for the bungled police operations in Mamasapano, Maguindanao province, last year.