Joblessness down to 21.4% in Q4 | Inquirer News
Close
menu
search 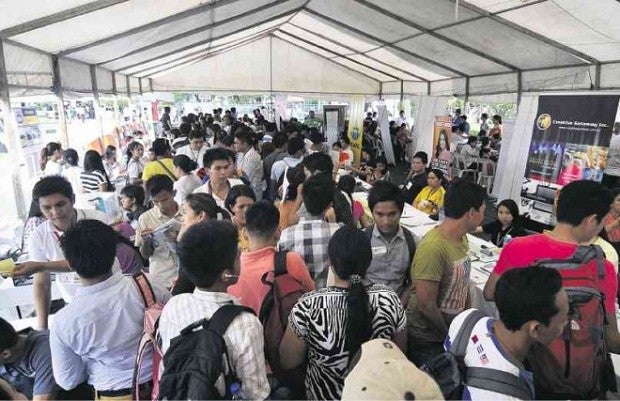 JOBLESSNESS among Filipinos decreased to 21.4 percent or about 9.1 million in the fourth quarter of 2015, down from 23.7 percent or over 10 million the previous quarter, according to a survey by the Social Weather Stations (SWS).

Malacañang welcomed the results of the survey which was conducted from Dec. 5 to 8 among 1,200 respondents. It had a margin of error of plus or minus 3 percentage points.

“Over the past five and a half years, the Aquino administration has made significant strides not only in terms of economic growth but also toward greater inclusivity,” Lacierda said.

“Clearly, whether by working to attract more investments or by accelerating the resolution of our job-skills mismatch through agencies like the Department of Labor and Employment and the Technical Education and Skills Development Authority, the government remains committed to continually improving the lives of our bosses,” referring to the Filipino people, he asserted.

The SWS definition of joblessness covers respondents aged 18 and above who are “without a job at present and looking for a job.” This excluded those not looking for work like housewives, students and retired or disabled persons.

The SWS also reported an improvement in job market optimism.

According to the survey, 45 percent of adults expect the number of available jobs to increase over the next 12 months. Only 16 percent expect fewer jobs while 27 percent said there would be no change.

Results of the survey also showed that fewer adult Filipinos were retrenched in December than in the previous quarter.

The nationwide joblessness rate in December included 8 percent who were retrenched (estimated 3.4 million adults), from 11.7 percent in September.

The government’s latest Labor Force Survey (LFS) puts the official unemployment rate at 5.6 percent in October last year. The government uses the term unemployment in the LFS to refer to persons 15 years and over and who are not working, looking for work and available for work. With a report from Inquirer Research