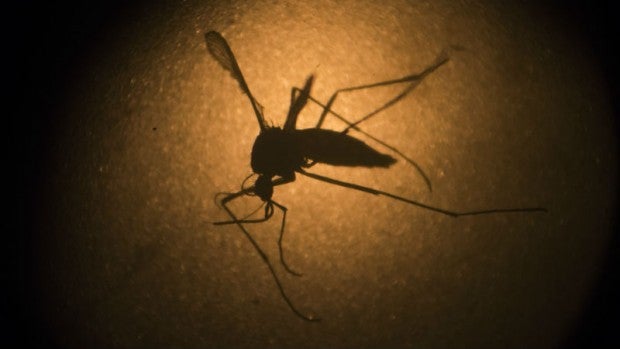 An Aedes aegypti mosquito is photographed through a microscope at the Fiocruz institute in Recife, Pernambuco state, Brazil, Wednesday, Jan. 27, 2016. The mosquito is a vector for the proliferation of the Zika virus currently spreading throughout Latin America. New figures from Brazil’s Health Ministry show that the Zika virus outbreak has not caused as many confirmed cases of a rare brain defect as first feared. (AP Photo/Felipe Dana)

KNOWING that advising abstinence from sex would be highly impractical, the Department of Health instead is telling Filipinos returning from countries stricken by the Zika virus to wear a condom to prevent local transmission of the debilitating disease.

Initially identified as a mosquito-borne disease, the Zika virus was recently found to also be transmitted through sexual contact.

The United States reported its first case of the virus in Texas involving a local resident who got infected after having sex with a partner who contracted the disease while traveling in Venezuela, one of the countries in South America with reported outbreaks of the virus.

“It is still unclear how long the virus stays in the body so we cannot really advise our fellow Filipinos returning from Zika-affected countries to avoid sex for a week or a month or two,” said DOH spokesperson Dr. Lyndon Lee Suy in a health forum Tuesday in Quezon City.

“Practicing safe sex would be of help. But then we also don’t know the extent of the protection that a condom can provide against transmission of the disease,” Lee Suy added. “But we hope that it’s like dengue, which stays only in the body for about a week.”

Initial studies have shown that it takes about a week for the body to shed the virus but some estimates have suggested that it stays in the blood longer.

The US-based Centers for Disease Control and Prevention (CDC) recently issued guidelines on how to prevent sexual transmission of the mosquito-borne virus which is linked to birth defects, such as microcephaly.

The CDC advised men traveling from countries affected by Zika to either abstain from sex during a partner’s pregnancy or to use a condom during sex with a pregnant partner.

Brazil, where the virus is spreading, has observed a spike in the number of infants born with microcephaly, a birth defect in which a developing baby’s brain fails to grow to its normal size, which could lead to mental disability.

Lee Suy said the government was studying issuing guidelines for blood donations by Filipinos who had traveled to Zika-affected countries to prevent local transmission of the disease.

“Donors with a history of travel to countries with Zika cases might be prevented from donating blood in the meantime while it is not yet clear how long the virus stays in the body,” he said.

Last week, the Philippine Red Cross directed its blood service facilities to advise donors who had recently been to Zika-affected countries to refrain from donating blood for a month following their return.