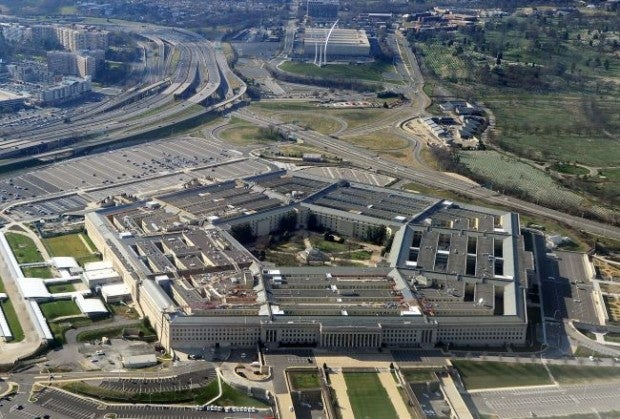 This file photo taken on December 26, 2011 shows the Pentagon building in Washington, DC.
The United States military hopes to send a sophisticated missile defense system to South Korea “as quickly as possible,” the Pentagon said. AFP

WASHINGTON — The United States hopes to deploy the THAAD missile defense system to South Korea “as quickly as possible” and the two countries will begin formal discussions on the matter “in the next few days,” the Defense Department said Monday.

“We would like to see this move as quickly as possible. We‘re beginning the consultations now in the coming days with the South Koreans and we expect that this will move in an expeditious fashion,” Pentagon press secretary Peter Cook said at a briefing.

Shortly after North Korea’s long-range missile launch Sunday, South Korea and the U.S. announced they would launch formal consultations on the deployment of the Terminal High Altitude Area Defense (THAAD) system to the South to better defend against the North‘s nuclear and missile threats.

Announcing the decision, the two sides said in a joint announcement that the goal of the formal consultations is to bilaterally explore the feasibility of THAAD deploying to and operating on the Korean Peninsula “at the earliest possible date.”

“Formal talks have not yet begun but we do expect that they will begin in the next few days,” Cook said.

The spokesman said that THAAD is part of a multi-layered missile defense and will “add another level of reassurance to our South Korean allies, other allies in the region.” He also said that THAAD deployment “would be an important step forward.”

“We do feel at this particular moment, given the actions over the last few days, that the addition of THAAD system would only enhance the protective measures that we already have in place,” he said.

South Korea has been in a dilemma for more than a year over how to deal with the sensitive issue amid Washington’s desire to deploy THAAD and China‘s intense opposition to it. The North’s twin provocations of its fourth nuclear test on Jan. 6 and then a missile test a month later gave Seoul justification for the decision.

China has claimed THAAD can be used against it, despite repeated assurances from Washington that the system is aimed only at deterring North Korean threats. Beijing expressed regret after the South and the U.S. announced the decision to hold THAAD talks. Cook stressed that THAAD is a defensive system focused on North Korean threats.

“This is … a defensive system put in place to deal with the threat posed by North Korea in addition to the layered missile defense we already have in place,” he said. “So, we don‘t believe that it should pose any sort of concern to the Chinese.”

White House spokesman Josh Earnest also said that THAAD deployment is “geared solely at the risk that is posed by North Korea.”

“South Korea is a treaty ally of the United States and we take those obligations quite seriously,” he said. “We’re committed to the security of South Korea and that is exactly what this technology is intended to address, which is the threat that emanates from North Korea.”

Cook said that the North‘s rocket launch succeeded in putting a satellite into orbit.

“We’ve been able to determine that they were able to put a satellite or some space device into orbit,” he said.

He declined to characterize how successful the launch was, but said it was “successful in adding further destabilization to the region.”

“It was another provocative action that does nothing to enhance stability on the Korean Peninsula. As to whether or not it achieved North Korea‘s goals, you can ask the North Koreans, but there’s nothing about this test that surprises us, and so in that sense, again, it‘s consistent with what we’ve seen previously from the North Koreans,” he said.