FVR throws support behind Leni, but is mum on Mar 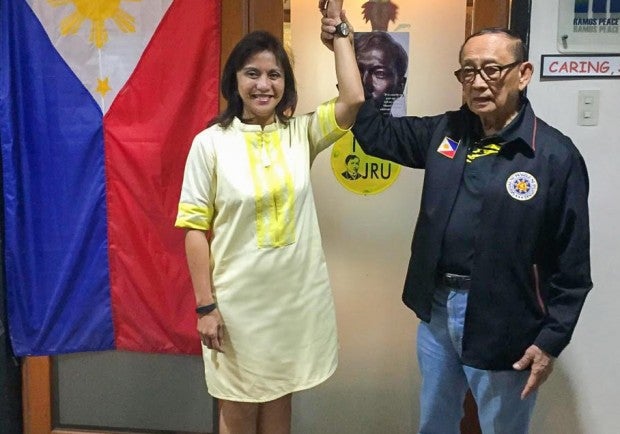 A DAY before the official launch of the campaign period, Liberal Party (LP) vice presidential candidate Leni Robredo has won the support of a prominent and powerful personality, former President Fidel V. Ramos, according to her staff.

In a news release Monday, the Robredo camp announced that Ramos had officially endorsed the candidacy of Robredo following a visit to Ramos’ office in Makati.

The candidate’s publicist provided photos of the visit Monday morning, including one showing the former President raising Robredo’s arm.

There was, however, no word on whether the 87-year-old Ramos would do the same for Robredo’s running mate, LP standard-bearer Mar Roxas.

In December, Ramos reproached Roxas and Davao City Mayor Rodrigo Duterte for their public spat, advising the presidential candidates to start acting like a president, if they wanted to get the job.

Her staff said the widow of Interior Secretary Jesse Robredo asked Ramos for advice on running her campaign.

“In the meeting, Ramos shared his campaign experience in 1992 and offered Robredo some advice on how to woo voters as she visits different parts of the country starting tomorrow (Tuesday),” according to the news release.

According to her staff, Robredo told Ramos: “I came here to ask for your support.”

The former President was quoted as having replied: “You’ve always had it. You didn’t even have to come.”

Meanwhile, Robredo was the keynote speaker at the opening of Zonta International District 17 Area 3 meeting at Sugarland Hotel in Bacolod City on Friday.

She said a nation that is ruled in justice and fairness is business-friendly.

“We might have attracted some attention in the last four years, and became the new darling of emerging markets, but unless we sustain our reforms on the governance plane, that attention will once again fizzle out and we will go back to square one,” Robredo said.

“This campaign for good governance and this kind of public service that aims not to leave any Filipino behind have become my work as I try to fill my husband’s shoes,” she said, as she stressed the need to empower people.

Since she became a representative of Camarines Sur, Robredo said she had brought in billions in funding for infrastructure and social services to her district using innovative means to source money within the bureaucracy and from private-public partnerships.