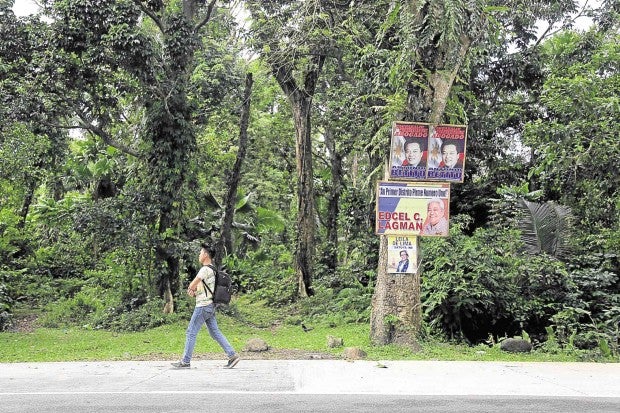 HURTING TREES Even before the official campaign period for the May 9 elections started, campaign materials of local and national candidates have been posted on trees lining a highway in Legazpi City in Albay province. MARK ALVIC ESPLANA / INQUIRER SOUTHERN LUZON

WITH THE start of the election campaign period for the presidential race and for other national positions on Monday, environment and election officials in Southern Luzon have asked candidates to be mindful of where to put their campaign materials.

Trees, they said, should be respected and not to be treated as posting areas.

“Please do not injure trees. Spare them as posting areas for [your] campaign materials,” Alfredo Palencia, director of the Department of Environment and Natural Resources (DENR) in Quezon province, said on Monday.

Supporters of candidates often nail posters, placards, and other campaign materials of various sizes on tree trunks along national highways where these are visible to motorists. Palencia said punctures caused by nails or metal staples on trunks would impair the health of trees.

Presidential Decree No. 953, enacted in 1976, penalizes the “unauthorized cutting, destruction, damaging and injuring of certain trees, plants and vegetation.”

A special DENR team has been tasked with monitoring the campaign and file charges against violators.

Palencia urged local candidates to adopt the protection of the environment as a priority program once they are elected. “They can make the planting of trees, coastal clean-up and other environmental protection activities not just an annual program but a continuous concern,” he said.

In Albay province, DENR officials and the Commission on Elections (Comelec) aired a similar appeal to candidates.

Gilbert Gonzales, DENR director in Bicol, said a tree would be vulnerable to pest attacks once its trunk is damaged.

He said his office had not filed a complaint against anyone in past elections because most candidates would deny that they were responsible in displaying their campaign posters.

“So it’s very hard on our part to identify a violator unless we catch him or her in the act [of posting these campaign materials],” Gonzales said.

Lawyer Romeo Serrano, Comelec provincial officer, said candidates or their supporters who violated the guidelines on posting of campaign materials would be given three days to explain and remove their posters.

The Comelec can file a complaint against the candidate or his or her supporter once the notice of violation is ignored.

Serrano said his office was also planning to hold a covenant signing among candidates in Albay, not only to ensure the conduct of peaceful elections but also to maintain cleanliness during the campaign period.