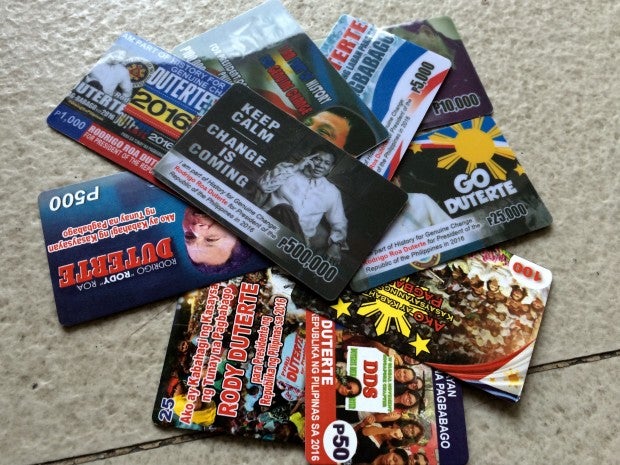 DAVAO CITY—Scratch a card and donate cash—in amounts ranging from as low as P25 to as much as P500,000—to Rodrigo Duterte’s presidential campaign.

Because the Davao City mayor has a standing order to refuse funds coming from questionable sources like illegal drugs, gambling and from businesses that  have transactions with the government, Duterte’s campaign group in Mindanao has come up with a creative way of raising money.

This week, Duterte’s camp will launch its scratch cards to solicit campaign contributions.

Daisy Encabo, spokesperson for the Contribution Card project of  Duterte’s Mindanao group, said the idea was hatched out of  financial necessity.

“Our campaign coordinators do not have the funds to go around to do  their work. People are excited to campaign for Duterte, but they cannot do this due to lack of funds. So we thought of this people-funded campaign,” Encabo told the Inquirer.

The buyer will have to scratch part of the card’s back to reveal  the personal identification numbers (PIN) and letters, which will be sent, along with his or her name and address, to a phone number for registration. The personal information provided by the buyer will be automatically loaded to a data system managed by the Duterte camp.

The buyer will then receive a text message of thanks for the contribution to the DU30 Presidential Campaign fund.

“Let’s make ordinary people be the main force of a successful campaign,” the acknowledgment text adds.

The donor is also urged to promote the program.

Registering the donation will give the buyer assurance that the money goes to the campaign.

“We will know which coordinator sold the card. We will know how much funds come in as this will automatically enter our data system,” Encabo said.

The card can also serve as campaign collateral.

“The donors can keep it as a [souvenir],” Encabo said.

“Through this card, people can claim that they did the opposite. Instead of selling their votes, they bought their candidate—Duterte,” she added.

For the Duterte camp, the information gathered through the scratch cards can also be used to send messages to the candidate’s supporters.

“Since we have their information, including their cell phone numbers, we can  text blast them with our activities—like a Duterte rally in a town plaza on a certain date and enjoin them to attend the event,” Encabo said.

“As the database grows, snowballing text blasts will be sent to voters with inspiring news about the campaign on a day-to-day basis and, therefore, sustaining their interest at the least, and at best, catalyzing their multiplier effect,” she added.

The system can also be an anti-PCOS cheating mechanism, referring to the voting machines to be used by the Commission on Elections (Comelec).

“When the PINs, names and addresses are sent via SMS to the system, we can build another information subsystem to compare the database to an uploaded  voters list (names, precinct number) provided by Comelec. With that we will know not only the reach of the cards but also the number of captured voters in each precinct consolidated by voting center, municipal, provincial canvasses,” Encabo said.

“If, for example, we have 100 card-bearing voters in a precinct and the  PCOS result points to say, 50 votes for Duterte, we will immediately know we are cheated by 50 percent and the legal team can immediately file a protest,” she explained.

And if Duterte succeeds in clinching the country’s highest post, Encabo said the database could be used to send text messages from the President to  his supporters.

“Duterte can send thank-you messages to those who supported him,” she said.