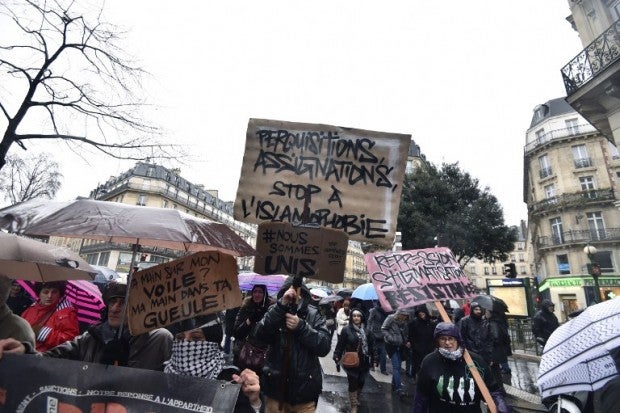 People holding placards reading “searches, summons, stop to the islamophobia” take part in a demonstration on January 30, 2016 in Paris, to protest against government plans to extend a state of emergency for another three months after the November terror attacks in Paris as well as plans to enshrine some of these measures in the constitution. / AFP / ALAIN JOCARD

UNITED NATIONS — Decrying the rise of Islamophobia worldwide, Pakistan has called for action to combat the forces of xenophobia and warned that if timely steps were not taken to check this disturbing trend, it could threaten regional and global peace and security.

Speaking at an event organized at the UN by Pakistan Mission and the OIC on “Countering Xenophobia through Interfaith Cooperation”, Ambassador Maleeha Lodhi said that Islamophobic acts were unfortunately taking place in countries known as traditional champions of human rights and humanitarianism.

She regretted that some unprincipled politicians in the West had sought to build their political fortunes by spreading fear and xenophobia – promising to build walls against migrants; barring refugees, even widows and orphans; threatening to ban the adherents of a specific religion from entry to their countries’ shores.

Unfortunately, she said, this campaign of hate and prejudice had received a fillip from ignorant Western media portrayals of Muslims.

Initiating the discussion Ambassador Lodhi said the purpose of the event– during a week at the UN, devoted to interfaith harmony – was to highlight the concern of Pakistan and OIC countries over certain recent developments which were posing a danger to such harmony, to social cohesion and to the observance of human rights and humanitarian norms.

The instances of insults against Islam and Muslims were now legion, she said. Islam has been called unspeakable names; minarets have been portrayed as missiles.

These have not been empty insults. “Expressions of such hate and prejudice have provoked physical and psychological violence against Muslims and their businesses, mosques and community centres in some countries. 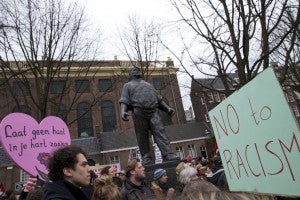 Placards read “No To Racism” and “Don’t Let Them Sow Hatred In Your Heart” during a pro immigration demonstration in Amsterdam, Netherlands, Saturday, Feb. 6, 2016. Several hundreds of pro and anti immigration supporters rallied in the center of Amsterdam, and thousands of people took part in protests against Islam and immigration in several European cities. (AP Photo/Peter Dejong)

“Almost all Muslim communities have been subjected to such intolerance. Many live in fear. Their alienation expands the divide between faiths and cultures within and among nations.”

Ms. Lodhi quoted President Obama who acknowledged during his visit to a mosque earlier this week that “an attack on one faith is an attack on all our faiths. And when any religious group is targeted, we all have a responsibility to speak up.”

She also highlighted the plight of refugees and migrants pouring into Europe. While initially this evoked many heart-warming acts of generosity, humanity and solidarity, the purveyors of hate have sought to turn the tide against the advocates of openness and humanitarianism, especially after the horrific terrorist attacks in Paris.

She added: “They have equated helpless refugees and migrants with violent extremists in order to generate political support for the forces of hate, prejudice, intolerance and xenophobia.”

Terming such xenophobia and discrimination a ‘dangerous trend’, she warned that such profiling of entire peoples and communities by religion or ethnicity, has grave antecedents. Seventy-five years ago, this led to the Holocaust.

Ambassador Lodhi said those who had declared the denial of the Holocaust a crime should hardly argue that the freedom of expression allowed insults against Islam and hate speech and incitement to violence against Muslims.

As hate inevitably breeds hate, Islamophobia will breed its antithesis. “It is a recipe for a clash of cultures – a clash we must avoid if the world is to have any hope of collective action to end the chaos in the Middle East and eliminate all forms of terrorism”, she added.

Prominent speakers at the event included interfaith activists Dr. William Vendley, Dr. Munir Al-Kaseem and Dr. Faroque Ahmed Khan, who appreciated the timely initiative by Pakistan and stressed the fact that this had become a global issue which needed to be urgently addressed.