Aquino, Murad may meet to save peace 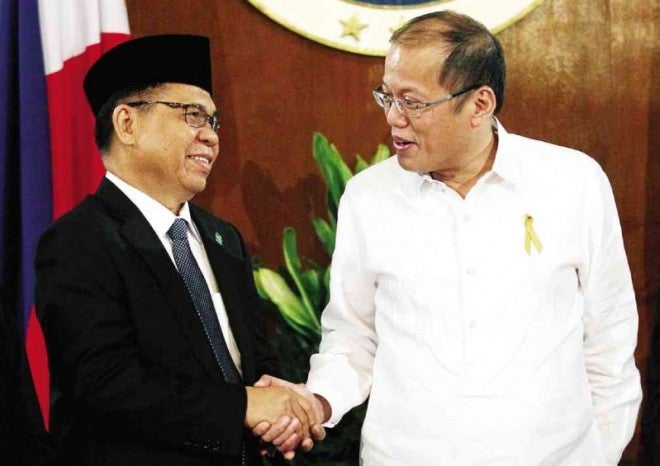 But for now, the government and the rebel peace panels cannot say whether such a meeting was in the offing.

“We haven’t received any overtures [from government] as of now,” said Mohagher Iqbal.

When asked about the possibility of such a meeting, Teresita Deles, the presidential adviser on the peace process, said that one only had to recall the President’s actions early in his administration in pursuit of ending the insurgency in Mindanao.

The President and Murad also met several times in between to iron out kinks in the negotiations.

The peace panels are set to meet again in Kuala Lumpur, where they would likely agree on a joint statement to address yet another major setback in the 17-year peace negotiations.

“While Congress was unable to pass the Bangsamoro Basic Law as we had hoped, we should remember that the commitment on the part of the Republic of the Philippines persists, and that overall I believe all sides are committed to ensuring that the progress we have made this far remains and becomes a durable foundation for the future,” he said.

Quezon also described as “speculative and premature and a cause for undue alarm” talk about the likelihood of the next administration having to deal with renewed conflict in Mindanao.

He stressed that the framework peace agreement continued to exist and the government remained “committed” to it.

“We believe it’s not that much longer until a new Congress would be elected and could then return to the work on deliberating on the Bangsamoro Basic Law. It would be, I think, unfair to all the parties in Mindanao—Christian, lumad and Moro—to speculate on any sort of violence or fighting when the public statements have all been premised on maintaining the progress thus far and the peace that continues to exist,” Quezon said.