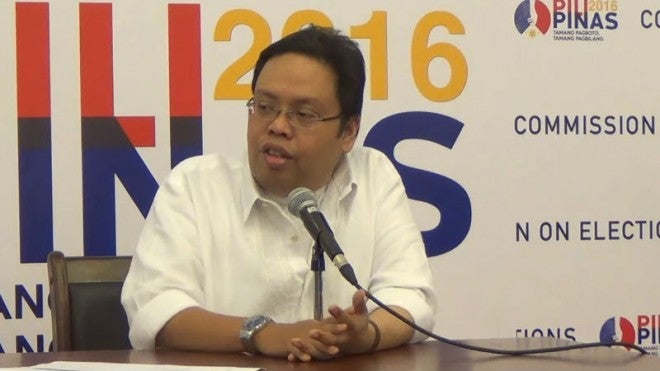 With the official campaign period for May elections just five days away, the Commission on Elections (Comelec) has issued a warning against government officials who would vigorously campaign for their preferred candidates.

Resolution No. 10049, which sets the implementing rules and regulations on the 2016 elections, defined “election campaign” or “partisan political activity” as an act “designed to promote the election or defeat of a particular candidate or candidates to a public office.”

Under Section 1, number 4 (e) of the said resolution, personal opinions, views and preferences given by government officials will be considered as election campaigning.

“Personal opinions, views, and preferences for candidates contained in blogs or micro-blogs shall not be considered as acts of election campaigning or partisan political activity unless expressed by government officials in the Executive Department, Legislative Department, the Judiciary, the Constitutional Commissions and the members of the Civil Service,” the resolution, which was promulgated last Feb. 1, read.

The same provision was first issued in Resolution No. 9615 which laid out the implementing rules and regulations for the 2013 senatorial and local elections.

In an interview with INQUIRER.net, Comelec spokesperson James Jimenez said that violation of these said rules by government officials would serve as a basis for an administrative complaint.

“We believe (that it will be a ground for an administrative charge.) Can you imagine if, for instance, a local government official, say, a comptroller of a municipality, comes out to campaign for the incumbent?” Jimenez said.

The Comelec official believes that the campaigning for candidates by incumbent government officials would send a “chilling effect” to their respective agencies.

Under Section 37 of Resolution No. 10049, the campaigning for candidates by government officials would constitute an “election offense” which is punishable by imprisonment of not less than a year but not more than six years without probation. The erring official shall also be sentenced to disqualification to hold public office and deprivation of his right to vote, in accordance to Sec. 264 of the Omnibus Election Code.