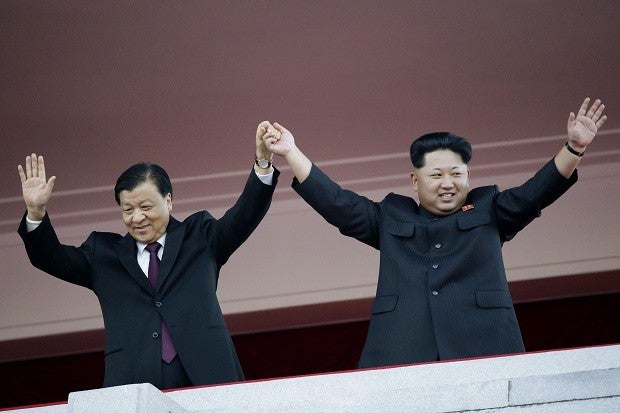 BEIJING — North Korea’s announcement of plans to launch a long-range rocket made during a visit to Pyongyang by a top Chinese envoy will likely be seen as yet another sign of gross disrespect toward its chief ally.

Adding to the insult: North Korea’s launch window for what critics call a banned test of ballistic missile technology falls during the Lunar New Year, marring China’s most important seasonal holiday for many officials.

The announcement again places China under pressure from the US and others to use its influence with Pyongyang to rein in its communist neighbor, despite Beijing’s protestations that such influence is overestimated.

In Washington on Tuesday, top diplomat for East Asia Daniel Russel said a launch “would be an unmistakable slap in face to those who argue that you just need to show patience and dialogue with the North Koreans but not sanctions,” in an apparent reference to China.

Russel called for tough new sanctions, including what are believed to be a ban on selling the North oil or buying its minerals, excluding banks doing business with it from accessing the dollar-based economy, or even barring its flagship airline from entering other countries’ airspace.

Those are exactly the sort of regime-destabilizing steps that China fears, and Beijing, a veto-wielding permanent member of the United Nations Security Council appears to be pushing back. China already appears to be dragging its feet on a response to North Korea’s purported first H-bomb test on Jan. 6.

“Sanctions are not an end in themselves,” Wang said. “The new resolution should not provoke new tension in the situation, still less destabilize the Korean Peninsula.”

Chinese state media have been even blunter, laying the blame on Washington for provoking Pyongyang and accusing it of maintaining a “Cold War mentality.”

Sanctions have thus far included bans on weapon sales, dealing with blacklisted individuals or enterprises and other targeted measures. Although Beijing has supported those measures, it points to North Korea’s continuing nuclear tests and missile launches as proof of their ineffectiveness.

North Korea on Tuesday informed international organizations of its plans to launch an Earth observation satellite on a rocket between Feb. 8 and 25. The launch declaration, meant to warn civilians, shipping and aircraft in the area about the rocket and falling debris, follows North Korea’s disputed claim on Jan. 6 to have tested a hydrogen bomb, the country’s fourth nuclear test.

A visit by China’s chief North Korean envoy, Wu Dawei, to Pyongyang this week had been primarily an attempt to sound the North out on its intentions, and, as in the past, Beijing was probably not informed of the announcement beforehand, said Liu Ming, an specialist in Korean issues at the Shanghai Academy of Social Sciences

“In order to maintain a normal relationship, China won’t adopt all-around sanctions against North Korea. To do so would plunge the relationship into a hostile state and China is unwilling to go as far as that,” Liu said.

So far, China’s entirely state-controlled media has provided only limited coverage of the North’s announcement and remained mum on Wu’s mission, possibly to limit the effect on public opinion that has grown increasingly critical of Pyongyang.

China has strong historical, political and financial concerns that factor into its opposition to sanctions that could undermine or even topple reclusive leader Kim Jong Un’s hardline communist regime.

China fought against South Korea, the US and their allies in the 1950-53 Korean War and, for years, described their relationship as being “as close as lips and teeth.” Beijing fears that political turmoil could send refugees streaming across the border into northeastern China and, ultimately, see US troops occupying what it sees as a crucial buffer with South Korea, where 28,000 troops are based as a legacy of the war that ended with a truce, not a peace treaty.

Additionally, Chinese state companies, private businesses and financial institutions are the chiefly beneficiaries of other countries’ shunning North Korea, dealing in fields from tourism to mineral extraction. Harsher measures would affect their bottom line, along with the economy along 1,420-kilometer (880 miles) Chinese-North Korean border.

Still, China’s patience with North Korea’s snubs and provocations has its limits, said Jin Linbo, a Korea expert at the China Institute of International Studies.

Jin said China would like to try additional steps before tough sanctions are imposed, mainly using inducements to persuade the North to return to six-nation nuclear disarmament talks hosted by Beijing that have been stalled since 2009.

However, if North Korea insists on pushing ahead, “there will be no reason for China to persuade other countries to mitigate the sanctions,” Jin said.