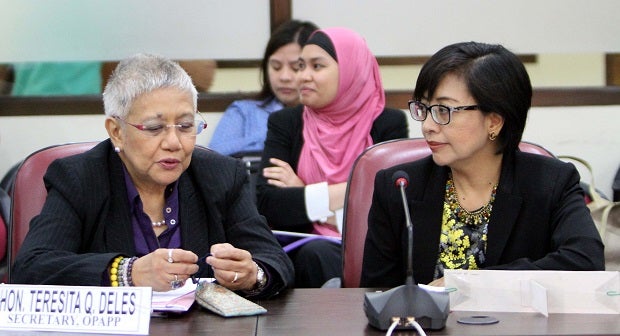 With the “death” of the proposed Bangsamoro Basic Law (BBL) in the 16th Congress, the Filipinos are said to be “grieving, hurting and dreading what tomorrow may bring.”

Such was the statement issued by government chief negotiator Miriam Colonel Ferrer on Wednesday regarding the failure of Congress to pass the proposed law.

Ferrer did not mince words when she hit the faults of both chambers of Congress which contributed to the death of the landmark legislative measure—saying that all the efforts of lawmakers and taxpayers’ money amounted to nothing.

The official said that the supposed indifference and absenteeism of members of the House of Representatives contributed to “prolonged and repetitive” interpellations which wasted the remaining session days. While in the Senate, Ferrer said that the absence of bill sponsor and a change in procedure contributed to the delay of the BBL passage.

“The sheer indifference and chronic absenteeism of majority of the legislators manifested in the lack of quorum almost on a daily basis in the House of Representatives, and the prolonged and repetitive interpellation of oppositors ate up the remaining sessions.”

“In the Senate, the intermittent absence of the bill sponsor and the remaining interpellator stalled the deliberation. Moreover, a belated change in procedure was entertained. Only last December 2015, the Senate practically conceded that the Bangsamoro bill is of local application and therefore the upper chamber should have just waited for the House version to be remanded to it,” Ferrer said in a statement.

Despite the death of the BBL in Congress, Ferrer said that the Office of the Presidential Adviser on the Peace Process (Opapp) will continue to implement the provisions in the Comprehensive Agreement on the Bangsamoro which provides the steps for the transformation of conflict areas into peaceful communities.

“The collective inaction of our legislators to complete the deliberation on the BBL did not, and will not, stop the momentum of the Bangsamoro peace process. At this low point, we call for sobriety and perseverance,” she said.

Ferrer has only one wish to politicians who tolled the death knell on the BBL: “We therefore urge our politicians and fellow citizens to take the time to study the history of the conflict and the peace process so as to get a better understanding of the road map and our unflinching efforts to see it through.”

The Palace has earlier said that it will support the peace process between the government and the Moro Islamic Liberation Front beyond the term of President Benigno Aquino III. IDL

Read Next
Poe-Escudero kick off rally will be ‘exciting, positive’—campaign manager
EDITORS' PICK
Every Filipino home can now be a smart home with realme TechLife
Bayan Muna condemns knife attack on NUPL Panay officer
ING Pay is your new online payment partner — and more
PLDT Home Prepaid WiFi customers now under the care of Smart
Bill seeking presumption of guilt of drug suspects ‘alarming’ – Amnesty International
Drilon questions validity of Parlade’s being anti-insurgency task force spokesman
MOST READ
Miss Universe Thailand fired as mental health ambassador
Robredo on Duterte’s dare to shop for COVID vaccines: ‘Sobrang pikon’
Robredo: Can PH wait until 2023 to get back to normal?
Mikey Garcia ‘finalizing’ May fight with Pacquiao
Don't miss out on the latest news and information.