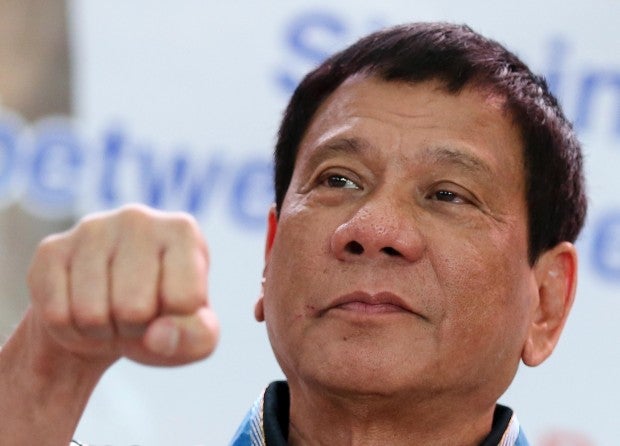 At a press conference, First Division presiding Commissioner Christian Robert Lim announced that the decision was unanimous in favor of denying the four petitions against Duterte due to lack of merit.

“The First Division has ruled to deny all petitions against Mayor Rodrigo Duterte,” Lim told reporters.

The decision of the poll body said that former Partido Demokratikong Pilipino-Laban ng Bayan (PDP-Laban) standard-bearer Martin Diño has validly filed a certificate of candidacy (COC) for president; that Diño was not declared a nuisance candidate and that the withdrawal of Diño for Duterte was valid.

The division also found that Duterte’s substitution for Diño was valid and that the Davao City mayor did not commit any material misrepresentation in his COC.

The petitions of broadcaster Ruben Castor and UP student leader John Paul delas Nieves against the feisty mayor were also denied for their failure to appear in the preliminary conference of their respective cases.

“The Punisher will live to die another day,” Lim said in jest.

Comelec chair Andres Bautista said that the decision would mean that Duterte is still included in the six presidential candidates for May polls.

“He is still a candidate as we speak and we are now in the process of finalizing the list of candidates,” Bautista said.

READ:  Why Duterte is noncommittal to presidential debates

The petitioners will be given five days to appeal the division’s decision to the full commission following the promulgation of the decision.

“He is still a candidate as we speak and we are now in the process of finalizing the list of candidates.” – Commissioner Christian Robert Lim

The first to file a disqualification case against Duterte, Castor alleged that the substitution of Dino was invalid because of a defect in his COC.

Delas Nieves also raised the same issues regarding Duterte’s invalid substitution, adding that the mayor committed material misrepresentation of “a material fact” as he “is openly flouting duly promulgated laws and the Constitution” and that he had no regard on human rights.

David, on the other hand, said Duterte made a “mockery of the law,” for his COC was not “validly and seasonably filed.”

On his part, Pamatong asked Comelec to declare Duterte as a “nuisance COC applicant,” adding that he is “communist supremo, jueteng lord of lords, mass murderer, and fanatically anti-American.” CDG/AC

Read Next
Enrile blocks confirmation of COA, CSC officials
EDITORS' PICK
On Day 2 of implementation, gov’t says workers now exempt from ‘no vax, no ride’ policy
Over 3 Million worth of prizes to be won at Smart Padala’s SENDali Manalo Promo!
Acer starts the year off strong with the Aspire Vero National Geographic Edition
Gear up and get ready to play with Yamaha Mio Gear
Metro Manila posts lowest temperature yet this ‘amihan’ season at 19°C
DOH: 28,471 new COVID-19 cases in PH; active cases now 284,458
MOST READ
Cold-case investigation names surprise suspect in Anne Frank’s betrayal
Czech anti-vax singer dies after deliberate infection
Derek Ramsay on being married to Ellen Adarna: ‘Gumaan ‘yung mundo ko’
Emma Stone calls Andrew Garfield a ‘jerk’ after he ‘lied’ about his ‘Spider-Man: No Way Home’ appearance
Don't miss out on the latest news and information.