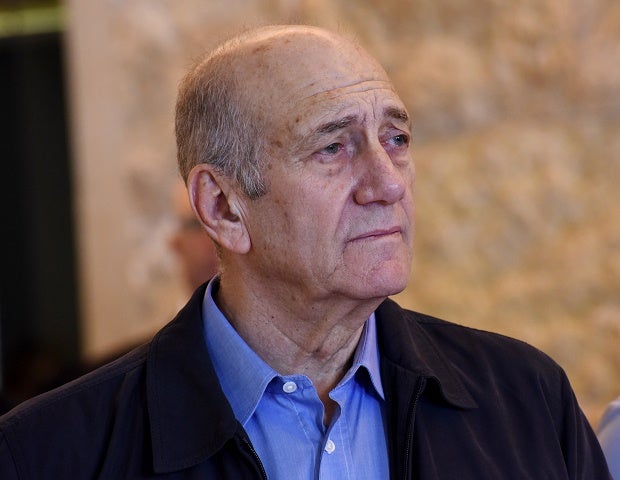 In this Dec. 29, 2015 file photo, former Israeli Prime Minister Ehud Olmert leaves the courtroom of the Supreme Court after the court ruled on his appeal in the Holyland corruption case in Jerusalem. An Israeli court has convicted Olmert on two counts of obstruction of justice for pressuring a confidant not to testify in multiple legal cases against him. The ruling Tuesday, Feb. 2, 2016, follows a plea bargain Olmert signed last month in which he pleaded guilty to the charges. Pool File Photo via AP

Olmert, 70, is already facing a jail term of 18 months beginning on February 15 for a separate conviction of bribery.

The plea bargain required Olmert to confess to two charges of obstructing justice in return for the six-month imprisonment for those felonies being served concurrently with the 18 months.

But while Jerusalem magistrates’ court justice Avital Chen accepted Olmert’s confession and conviction, the decision he issued stated “the court was not committed to the arrangement.”

“The default would be consecutive, not concurrent sentences,” he said according to a transcript of the court session.

The magistrates’ court will sentence Olmert, who was present in court Tuesday but did not make a statement, on February 10.

Israel’s supreme court was meanwhile still debating a January 19 appeal by Olmert on a third conviction from May 2015 over fraud and corruption, for which the former premier had been sentenced to eight months imprisonment.

Olmert’s conviction on Tuesday was over trying to persuade his former secretary Shula Zaken not to testify against him in the bribery case and in the fraud and corruption case.

Zaken had recorded him and used the materials to win a lesser sentencing for her part in the cases.

His confession to obstructing justice was the first time Olmert had pleaded guilty to any misconduct or crime in his various trials.

The impending 18-month prison term is a reduction of a May 2014 six-year sentence over two separate charges of taking bribes in the early 2000s in connection with the construction of Jerusalem’s massive Holyland residential complex.

His prison term will be the first time a former Israeli prime minister goes to jail.