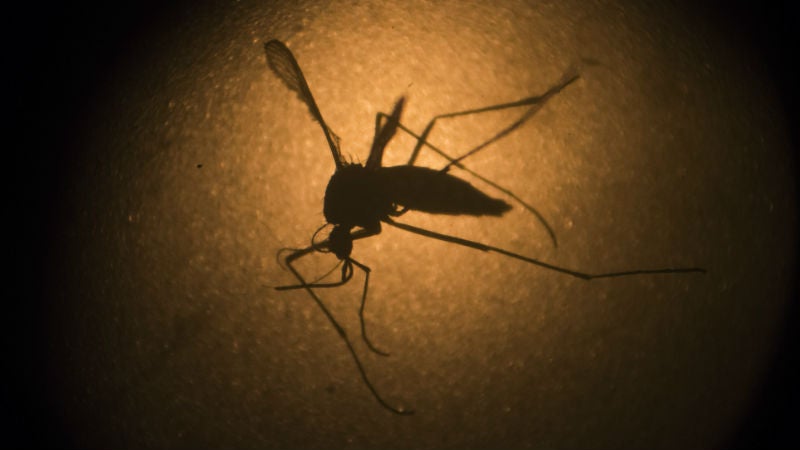 An Aedes aegypti mosquito is photographed through a microscope at the Fiocruz institute in Recife, Pernambuco state, Brazil, Wednesday, Jan. 27, 2016. The mosquito is a vector for the proliferation of the Zika virus currently spreading throughout Latin America. New figures from Brazil’s Health Ministry show that the Zika virus outbreak has not caused as many confirmed cases of a rare brain defect as first feared. (AP Photo/Felipe Dana)

THE DEPARTMENT of Health (DOH) on Tuesday assured the public that the Philippines was still free of the Zika virus as it announced measures, including increasing the number of testing kits, to address the disease should cases turn up in the country.

In a press briefing, Health Secretary Janette Garin said the government remained vigilant against the disease since the mosquito carrying the virus was present in the country.

“Worldwide, the local transmission of the Zika virus within the last nine months had been confirmed in 28 countries, mostly in Latin America. The Philippines is not on this list,” Garin said.

“However, the vector Aedes aegypti mosquito—the same type of mosquito that spreads dengue, Chikungunya and yellow fever—is in the Philippines so we are very aggressive in our surveillance and information dissemination,” she added.

There’s a report that a Filipino contracted the mosquito-borne Zika virus in Honduras, which the Department of Foreign Affairs (DFA) is looking into.

“We have not received a report from the post that confirms this report,” Assistant Secretary Charles Jose, spokesperson for the DFA, said in a text message.

Philippine health authorities are likewise validating the report that one of those infected by the virus in the country in the Caribbean is a Filipino woman.

The World Health Organization (WHO) earlier declared a global emergency over the spread of the Zika virus in Latin America and its suspected link to the surge of babies born with microcephaly, a congenital condition associated with incomplete brain development and abnormally small heads.

In the Philippines, a documented case of Zika virus infection was traced in Cebu in 2012. A 15-year-old boy was reported with symptoms of fever, headache, conjunctivitis, sore throat, muscle pain, abdominal pain, loss of appetite, nausea and vomiting.

After yielding negative results from tests on dengue and Chikungunya, the patient’s serum was tested positive for Zika virus. The patient recovered fully after three weeks of continuous bed rest and medication.

Garin said at least six hospitals in the country would be catering suspected cases of the Zika virus by next week.

The Research Institute for Tropical Medicine (RITM) in Muntinlupa City can accommodate patients who show symptoms of Zika infection, which usually begins three to seven days after being bitten by an infected mosquito.

The common symptoms include fever, rash, joint pain, and conjunctivitis. Other symptoms are muscle pain, headache and vomiting.

At present, there are 1,000 kits available for testing the Zika virus at RITM.

“Another batch of 1,000 kits will be delivered in two weeks,” Garin said.

However, she noted that the DOH could not use these kits to test just anyone as there was a lack of testing kits in other countries.

“We do not like to create panic or overreact because we would like to target our resources where it is necessary,” Garin said. “If we have stocks, let’s not abuse its use. We don’t waste our resources and we will use it at the appropriate time.”

She added that the testing kit for the Zika virus was not available commercially and only research centers, such as Center for Disease Control in Atlanta, Georgia, had it.

Garin said health experts were investigating a potential link between the Zika virus in pregnant women and microcephaly.

“Until concrete evidence are verified, women who are pregnant or planning to become pregnant should take extra care to protect themselves from mosquito bites. Pregnant women who are experiencing symptoms of the virus should seek early consultation,” she said.

The health secretary also advised pregnant women to avoid visiting places or countries where there had been reported cases of the disease.

“The Zika virus per se is not alarming to the patient. What is alarming is the possible causes to the fetus for the first three months of pregnancy,” Garin noted.

But the Zika virus, unlike HIV and hepatitis, does not stay in the human body for life, the health secretary said.

She also said that the WHO still was not recommending any travel and trade or screening restrictions related to the disease.

“But it is advised that travelers going to and coming from countries with known Zika virus cases maintain a high level of vigilance and self-care,” Garin added.

“The symptoms of the Zika virus disease can be treated with common pain and fever medicines, rest and plenty of water. If symptoms continue to occur after two days, consultation in the nearest health facility is recommended,” Garin said.

The DOH, through the Bureau of Quarantine, is monitoring incoming Filipinos or tourists who may have symptoms of the virus.

Garin also sought the cooperation of households to protect their environment from the infection by observing cleanliness.

“The first step to prevent mosquito-borne diseases is within our homes. Let us make it a practice and instill cleanliness in our surroundings,” she said.

The Philippine Red Cross (PRC) advised individuals who recently visited countries affected by the virus and were intending to donate blood to defer their plans for now.

PRC chair Richard Gordon said nonacceptance of blood donation from those who arrived from countries affected by the virus, such as Brazil and Colombia, was one of the precautions the humanitarian organization was taking “to ensure the public’s safety.”

To ensure that the virus would not spread in the country, Gordon said the PRC would be mounting weekly information campaigns and cleanup drives in various communities nationwide. With a report from Jovic Yee

Ex-sparmate Kambosos thanks Pacquiao for helping him become champion